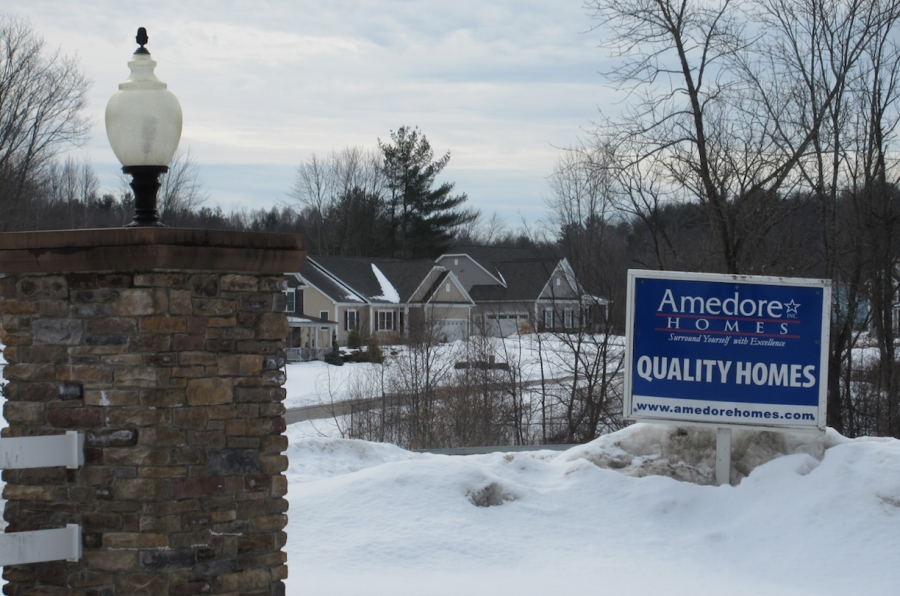 STILLWATER – A proposal to put up 19 new buildings near the southern part of Saratoga Lake—each containing four condominiums—is among multiple development projects that area residents are closely monitoring.

At a public hearing on Thursday, Feb. 15, the Stillwater Town Board heard from a number of residents regarding a revised proposal by Albany-based Amedore Homes to extend its Winding Brook development, which currently has more than 40 properties.

The proposal, initially discussed last summer by town officials, at first involved the construction of 11 more single-family homes closer to Saratoga Lake. But Amedore revised it to 19 buildings containing a total of 76 condominiums.

Representatives for Amedore Homes did not return repeated calls for comment.

The board voted on June 20, 2017 to table a resolution advancing the Winding Brook Planned Development District (PDD) after hearing from nearly a dozen residents who opposed the measure, according to minutes of that meeting provided by the town.

The opponents included a man who served on Stillwater’s Comprehensive Plan Committee. He claimed the Winding Brook PDD contradicts that 2006 plan because it “destroys the character” of the town, the minutes indicated. Other residents cited serious traffic concerns.

Subsequently, the Albany firm Creighton Manning was hired to conduct a traffic study of Battlefield Road (Route 423) and Route 9P, both of which are state roads. The latter roadway is well known by lake residents for its narrow design and many turns.

Stillwater town officials are also considering various other projects in the same area. They include a separate proposal for 21 single-family homes off Luther Road, called White Sulphur Springs, which was introduced at the Feb. 15 meeting.

“This continued increase in high-density development should be subject to greater holistic scrutiny due to the cumulative environmental impacts they will produce and the increased traffic on Route 9P,” observed Cedar Bluff Road resident John Cashin, in a Feb. 13 email sent to dozens of recipients.

Cashin is among a group of Town of Saratoga residents opposing a large residential project on Cedar Bluff Road proposed by Witt Construction.

“As Route 9P is a state road, the towns take little responsibility for traffic patterns, potential widening or structural maintenance,” he added.

Stillwater Supervisor Edward Kinowski called the pending construction proposals in his jurisdiction “reasonable,” adding that any determination about Route 9P is best left to the “experts.”

If enough residents petition the state Department of Transportation (DOT) for upgrades to Route 9P, Kinowski said, it is more likely the state agency will act.

Bryan Viggiani, a DOT spokesman, explained in an email that traffic impacts are reviewed under the state Environmental Quality Review (SEQRA) process. If any work on Route 9P is required, he added, the funding “would fall to the governing municipal body and/or the developer as part of impact mitigation.”

“People want to live on the lake,” Kinowski continued, when asked to respond directly to Cashin’s suggestion that local governments should cooperate more and coordinate projects across town borders.

Kinowski opined that local governments cannot dictate to developers how and where to build. “It doesn’t work that way,” he said.

“I don’t think anybody can stop development,” offered Cristina A. Connolly, who chairs the Saratoga Lake Protection and Improvement District (SLPID).

Connolly said SLPID is “proactive” in terms of working with municipalities to ensure the water quality of Saratoga Lake, which she called “Grade A.”

Municipalities, in turn, have to “abide” by proper regulations pertaining to storm water runoff whenever large development projects are considered.

David Chatt, a resident of Amedore’s existing Winding Brook neighborhood, sent a Feb. 17 email to Kinowski and the other town board members arguing that the Winding Brook PDD “is not a good financial investment.”

Chatt countered a claim by Amedore that the condos—each priced at $260,000—have the “potential” to raise an additional $127,000 in tax revenue for the town compared to single-family homes.

“The key word in that statement is ‘potential,’” he wrote. “The Amedore analysis does not include any information regarding when the additional revenue would be received as described nor does it address the probability of the underlying assumptions being correct.

“By allowing the condos to be built, the town is gambling on a potentially better tax revenue stream, and will have to wait well over a decade to see if it potentially pans out or not,” Chatt said.

He concluded: “I respectfully ask that you approve the amendment to the Winding Brook PDD for eleven single family homes only.”

As of this week, it is not clear if the Stillwater Town Board will vote on the amended Winding Brook PDD at its next regular meeting, scheduled for Thursday, March 15.

More in this category: « Three Promotions at Adirondack Trust City Business Leaders and Students Mingle at Tang »
back to top