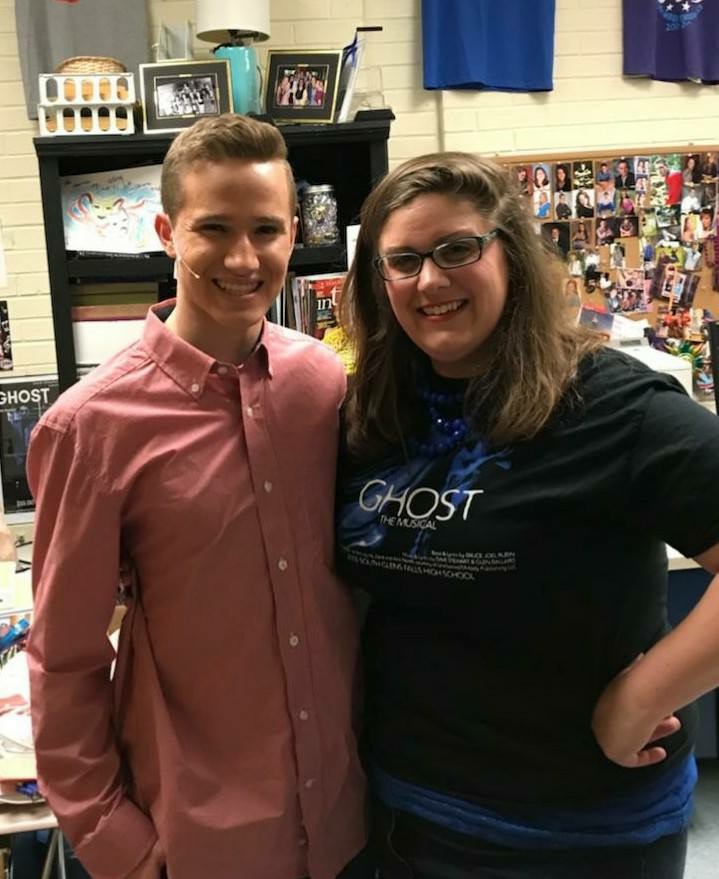 “[SGF] is great, the kids here are some of the most kindhearted students that I’ve ever had the pleasure of working with. That just makes everything, all the long hours and time spent away from my family, just that much more worth it,” Stambach-Fuller said, praising her students.

“Because of Betsy Stambach-Fuller, the students and the community are brought together by the music she teaches and the time and effort she puts into her work. Without her, the South Glens Falls High School music program would not thrive as it does now, and the students would not be as passionate and excited about the music as they are today,” said student Josh Daley in a letter nominating Stambach-Fuller for Women of Influence.

“I always knew that I wanted to remain active in music and theater and then I was looking at those teachers who were really influential on my life, and I thought ‘how cool would it be to keep that going and pay it forward, to do that same thing those teachers did for me, for others,’” she said.

Her favorite part of teaching is the interaction she has with her students.

“I have that opportunity to really watch them grow and develop into adulthood for four years, because as a music teacher, they’re consistently with me. I think that is the most rewarding part, watching where they start in ninth grade and then seeing how they’ve blossomed into kind and capable adults by the time they graduate,” Stambach-Fuller explained.

“Last year, one of my graduating seniors paid me the ultimate compliment. She said, ‘I’ve watched you for four years and I’ve noticed that you’re really constant in what you do, and you don’t take heed to how others perceive you, you just follow your heart and you do what’s right.’ She was saying that she has struggled with an eating disorder and things like that, so she looked up to me as a role model in that respect where I just remain true to my convictions and my heart, that gave her inspiration through the healing process. So, for this school year, that impacted me to think students really do watch every movement that we make, everything we say, it impacts them more than we might realize. So, I do focus more now on being that smile or being that hug that students who are struggling, and I may not realize they are struggling on those personal levels. I do tend to focus now on being there and going out of my way to say good morning to everyone in the hall or paying a compliment to a student just to lift the burdens that they carry,” she said.

The most recent show the drama club put on was Ghost the Musical, and it was the first time it was performed in the capital region.

“We really were able to put our own mark in the interpretation on it,” she said.

For the last five years, her select vocal group has competed at the international level and this year they finally got the chance to move on to semi-finals, which take place Saturday, March 24. For Stambach-Fuller, however, it isn’t about the competitions or accolades, it’s about watching her students become wonderful people.

“Years ago, we had a student who was battling throat cancer, so just watching our students really use the power of music to help with that. The emotional treatments associated with an illness and everything, those are the moments that really stick out, when the kids come together to help others,” she stated.

In the summer, Stambach-Fuller directs a couple of theater camps and works with the Schuylerville Community Theater. She also teaches an acapella camp at the Glens Falls Music Academy called CampApella.

“It’s nice to have the summer together with my family because during the school year with all of our all-county festivals, all-state festivals, and the play, I have a lot of time away from them in the evenings and weekends, so we definitely take advantage of reconnecting in the summer,” she said.

In her free time, Stambach-Fuller enjoys taking the train to New York City to see as many shows as she can. Her husband, Jonathan, is also a musician, so they enjoy going to as many concerts as possible, ranging from Ben Folds to the orchestra.

“I can’t escape the arts, in a sense,” she laughed.

Aside from her love for music and theater, she is also a New York Giants fanatic and never misses a game, whether on tv or in person.

More in this category: « Girl Scout Jamboree Waldorf Students Take Over the World »
back to top