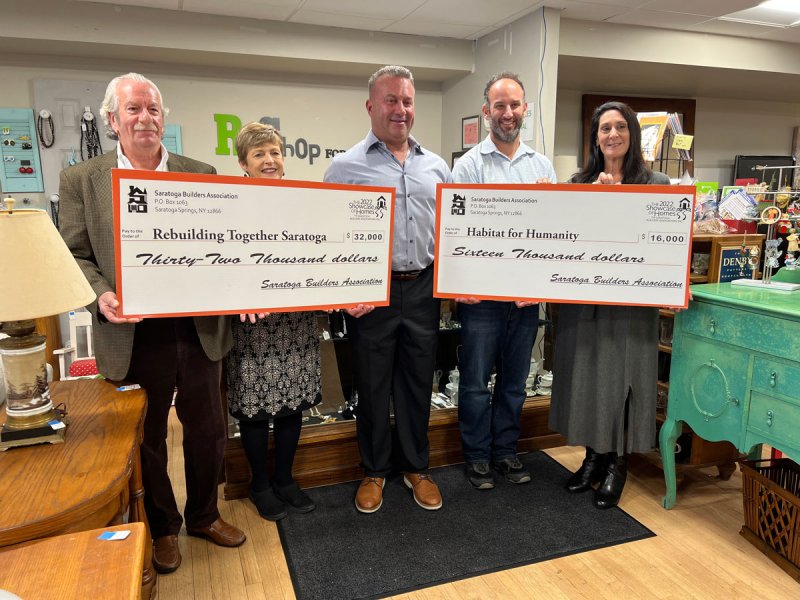 SARATOGA SPRINGS — The Saratoga Builders Association has presented proceeds totaling $48,000 from the 2022 Saratoga Showcase of Homes to Rebuilding Together Saratoga County and Habitat for Humanity of Northern Saratoga, Warren and Washington Counties.

The 2022 edition of the Saratoga Showcase of Homes had only 5 homes on tour this year due to labor and material shortages - Belmonte Builders, DSG Construction & Remodeling, Kodiak Construction, Trojanski Builders and Witt Construction.

This year’s tour attracted about 2,500 visitors to these beautiful new homes, which were on display over two weekends. In what has become an autumn tradition in the area, the Saratoga Builders Association is dedicated to maintaining this long-running show as an integral part of the fabric in the fall season.

This annual community event is made possible with the support of over 75 corporate and media sponsors. The 2022 Saratoga Showcase of Homes, celebrating 26 years of exceptional homes, was held on October 8-9 and 15-16. All the homes were located throughout Saratoga County and the proceeds benefited two local charities - Rebuilding Together Saratoga County and Habitat for Humanity of Northern Saratoga, Warren and Washington Counties.

For more details on the homes, builders, award winners, and virtual tours of every home, visit www.saratogashowcaseofhomes.com.

More in this category: « Artisans’ Market Opening in B-Spa Go Red for Women Luncheon Raises $250K »
back to top