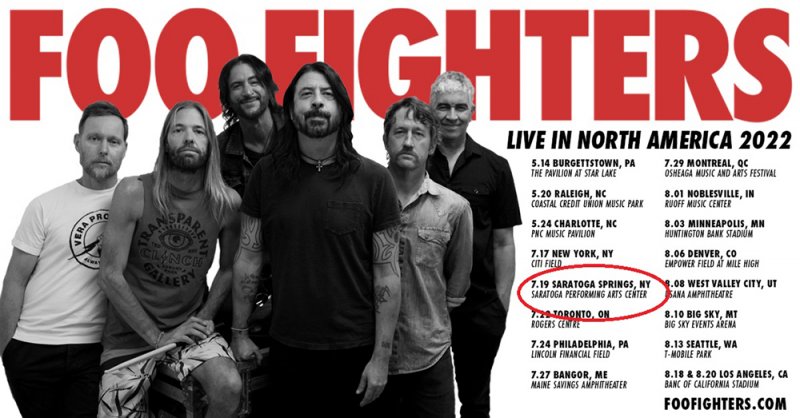 SARATOGA SPRINGS — Nestled between performances at Citi Field in Queens, and the Rogers Centre in Toronto, Foo Fighters’ 2022 North American Tour will stage a show at Saratoga Performing Arts Center on July 19.

The show will mark the 30th anniversary summer since Nirvana – with Grohl as its drummer – famously topped the bill at the 1992 Reading Festival, which Grohl later described as a “genuinely magical moment.”  The band’s major label debut, ‘Nevermind’ had been released the previous September and along with it their single “Smells Like Teen Spirit,” which brought so-called “alternative” music to mainstream America and played a role in fellow tour-mates Sonic Youth to title their tour film “1991: The Year Punk Broke.”

The Reading Festival show would be the last time Nirvana performed in England. “The memory is somewhat triumphant but melancholy, because we never came back,” Grohl – who joined Nirvana in 1990 - recently told Sam Moore of the New Musical Express.

Nirvana ceased to exist following the death of Kurt Cobain in 1994. Grohl subsequently formed the Foo Fighters, whose debut album was released in 1995.

The 2022 dates will mark Foo Fighters’ most extensive North American run since the February release of the band’s 10th album, “Medicine at Midnight.”