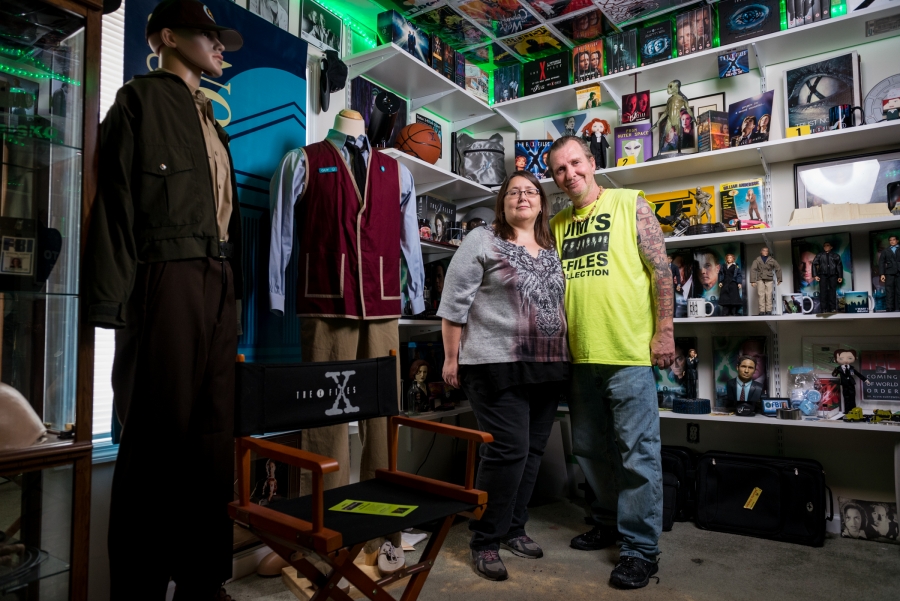 GREENFIELD – Photographs and figurines line the shelves of the room accented by a wide assortment of blazers and blouses, masks and uniforms, framed posters, furniture and one particularly wicked looking doll that sits beneath a wall hanging that reads: Chinga.

The collection of items, many of them iconic one-of-a-kind, are related specifically to “The X-Files” television series. It is Jim Thornton’s passion-project.

“The X-Files,” featuring Gillian Anderson as Special Agent Dana Scully, and David Duchovny as Special Agent Fox Mulder, debuted in September 1993. Thornton has been a fan since the first episode was broadcast.

“I loved the show and thought: wow, I’d like to own something from it, but back in ’93, ’94, there wasn’t a lot of stuff out there,” Thornton says.  A mid-90’s visit to a store called That’s Entertainment at Crossgates Mall brought him in contact with X-Files trading cards. Thus began his collecting. “That’s when I first thought: I own a piece of the show,” he says.

Thornton has collected items related to the show ever since. “I have commercial stuff, I have promotional stuff, I have things given out to crew members as gifts, screen-used props, wardrobe,” he says. “It’s hard to pick my favorite, but one of them would probably have to be from the (1998) episode ‘Chinga.’ It was (co-)written by Stephen King and there’s a doll in it that the lead actress throws in the microwave and it burns it all up. I have that doll.”

Thornton grew up a fan of the 1970’s show “Kolchak: The Night Stalker,” watching the show with his brother. “That got my hooked on the horror genre and when the X-Files came out, that brought me right back to the Kolchak days, it sucked me right in,” says Thornton, who is a professional painter by day. His kids, he says, for the most part think the collection is “pretty cool.” His wife, Kelly Anthony, is an office administrator.

“I do most of the collecting. If my wife sees stuff, she lets me know. She supports me a lot,” Thornotn says.

“The whole point is to preserve this part of American television history as much as possible,” says Kelly Anthony. “It’s a part of our life. When we find a piece, it’s like: it’s found its forever home. It’s not going anywhere.”

Among the one-of-a-kind items are props used on the show, obtained through the couple’s networking skills. “We’ve acquired some pieces from one of the prop-masters who had worked on the show when it was still up in Vancouver.”

The first five years of the show’s run, which was filmed in Vancouver, are among the toughest pieces to find.

“The Vancouver years are the absolute hardest stuff to get.  Some of the wardrobe from the first five years is on a dream list. It’s out there, somewhere. If anyone’s got any contacts, or any stuff: let us know.”

More in this category: « Neighbors: Jeff Goodell A Tale of (at least) Two Woodstocks: multiple festivals to mark 50th anniversary of event »
back to top