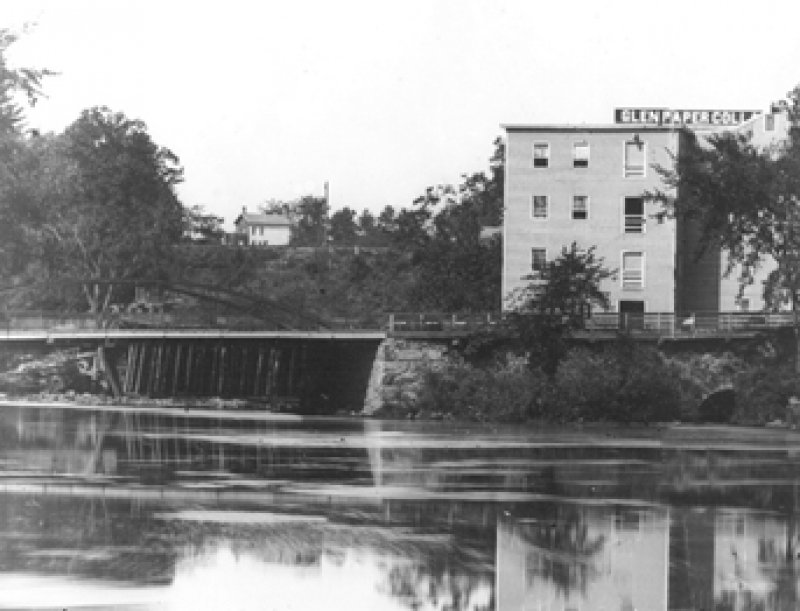 Although no trace remains today, the Glen Paper Collar Company was a visible presence in Ballston Spa 150 years ago. It was located in the famous Blue Mill building on the north side of Milton Avenue, built as one of the area’s first grist mills. Many may have heard of the collar company, which was one of the largest of its kind in the country. But few know that the company’s owners, Horace Medbery and Henry Mann, were also prolific inventors.

Horace Medbery was the son of Stephen and Sarah Medbery, proprietors of the hotel in Ballston Spa which still bears their name. He was one of those rare individuals who was able to put his inventions to practical use in his various business ventures in Ballston Spa, Mechanicville, and elsewhere. Henry Mann was the son of Henry Mann Sr., a prominent local businessman and Saratoga County treasurer. The Mann family lived in the former Aldridge’s Hotel, now the home of Brookside Museum, just down the street from The Medbery Hotel. Horace and Henry were neighbors while growing up in the village.

During the 1870s, a peculiar clothing fad swept the country. Disposable cotton-based paper collars were introduced to the upper classes as a way of maintaining a fresh, white collar rather than attempting to clean soiled cloth collars. Some of the first paper collars in the country were manufactured two miles north of Ballston by Lindley Murray Crane, a paper mill owner and holder of three patents. Henry Mann’s father also manufactured paper collar materials in nearby Factory Village for some years under the partnership of Mann & Laflin.

Horace and Henry recognized their business opportunity even before the fad hit its peak, and rented space at the Blue Mill to establish the Glen Paper Collar Company. In their first year, the partnership produced nine million collars. Profits were poured back into the business by purchasing the glazing works of Rand & Edwards located below them in the Blue Mill. Soon they occupied the entire building, so in 1871 they were forced to build a five-story, 60 foot by 40 foot addition, reportedly constructed in twenty days. They rented the old Waverly Hall for use as a packing station and salesroom.

Shipments of collars increased year after year. At its height in 1875, the factory was producing 21 million paper collars and five million paper cuffs per year and employed 150 people.

At this time, Medbery submitted his first of many patents. He, along with Henry Mann and Simeon Drake, perfected a new steam drying wheel for use in the collar factory. The machine was developed, as the partners put it, “after much study and reflection, and expenditure of money in purchasing machinery which did not meet our wants.”

On the same day as the drying wheel patent was filed, Medbery submitted an improvement for cutting paper collars, the object of which was to rapidly cut collars from long rolls of cloth-faced paper by passing it between two rollers. One of Ballston’s more unusual inventions was developed by Henry Mann, who patented a shipping box for paper collars that could be converted into an ornamental lampshade.

The three patents listed above would be the only inventions that related to the Glen Paper Collar Company. Despite becoming one of the largest paper collar companies in the world, the fad died out in the mid-1870s, forcing the partners to shut down the collar factory.  Henry Mann went on to invent and patent an envelope-making machine. Local inventor Samuel Day constructed nine of the machines which were set up in the Blue Mill. The Mann Envelope Company operated for several years before closing down for unknown reasons.

In 1879 Horace Medbery moved to Mechanicville and rented the Howland Paper Mill, operating it for three years before organizing the Hudson River Water Power & Paper Company. He erected an 800 foot-long dam across the Hudson River using an estimated 3.5 million bricks. In this endeavor, Medbery is credited with establishing a valuable new industry for the city. Other businessmen noticed the success of his project, and soon permanent brick yards were established such as the Mechanicville Brick Company and the Best Brick Company.

For the next four years, Medbery acted as secretary and general manager of the paper mill. During that time, he patented two machines for molding tubes from paper pulp. In 1891 he patented a conduit for underground trolley wire using material that he claimed was water-proof, gas-proof, and “practically indestructible.” Later that year he submitted a patent for a pail-making machine, which manufactured pails using paper pulp. There is a reference in Sylvester’s History of Saratoga County that the Glen Paper Collar Company produced and sold these pails, so this patent is very likely based on that endeavor.

Over the next few years Medbery put several more of his inventions to good use. In 1892 he established the Fiberite Company, which manufactured fiber pipes for interior conduits used to wire buildings. The technology he developed in his seamless tube patents no doubt was applied to this line of work. He also began producing fiber pails using his pail-making machine, and later developed a substitute for hard rubber and celluloid. Medbery will go down in history as possessing more 19th century patents than any other Ballston native.

More in this category: « Walking the Horses to Saratoga Amasiah Ford: A Veteran of the War of 1812 who Fell on Hard Times »
back to top