On Monday April 6, the Spa City will once again embrace Scottish-American culture with its second annual celebration of National Tartan Day.

This year, organizers are asking people to celebrate together in spirit, while socially distancing at home.

"There are so many ways to come together, virtually, this April," said Tartan Day organizer Deborah DePasquale, owner of TOGA Heritage. "And you better believe we have a few surprises under our tams!"

Last week, dozens of festive flags bearing the TOGA Heritage logo and tartan began flying on Broadway and will remain through April. Originally, the flags were meant to kick off a week of bag pipes, scotch tastings, weaving demonstrations and, of course, lots of people sporting tartan caps, scarves, kilts and "trews."

For DePasquale, the flags have taken on new meaning. "Now that most of us are socially distancing at home, we have more time to really focus on what matters most," she said. "What matters to me most is community and keeping up traditions that embody the best of what Saratoga has to offer."

As the global health crisis has deepened, DePasquale's efforts have migrated online and have taken on even more symbolic weight.

On April 6, DePasquale will debut an online TOGA Heritage store featuring "Wee Cuddle" care packages to send to friends and loved ones who are currently forced to stay apart. She describes the "cuddles" as thoughtfully curated collections of fine goods to bring comfort and joy. A portion from all sales in April will benefit the Wesley Healthcare Center, a senior living provider in Saratoga Springs.

Though TOGA Heritage previously raised money for the Center last year, in memory of DePasquale's late aunt, she said this year's goal of raising $5,000 for their capital campaign is even more pressing as seniors are the most vulnerable to the novel coronavirus.

The four care packages include assortments of signature TOGA Heritage items including tartan scarves, blankets, candles, totes, plates, mugs and more. When placing an order, customers can provide a personal message to be printed on a collectible TOGA Heritage postcard. Cuddle packages range in price from $98 to $176.

The online store is at: https://togaheritage.com

TOGA Heritage has partnered with Morrissey's at the Adelphi to offer a Monday take-out Tartan Day signature dish and beverage, with a portion of those proceeds to benefit the Wesley Healthcare Center as well. All orders will include commemorative TOGA Heritage tartan coasters and napkins.


A TARTAN FOR SARATOGA, MADE IN SARATOGA
What's Tartan Got To Do With Toga?

One of the most distinct symbols of Scottish culture, tartans are plaid patterns that have a connection to a family, community or place.

Though Americans tend to use the words "tartan" and "plaid" interchangeably to describe almost any checkered fabric, there can be subtle differences between the two regarding the criss-cross pattern and number of colors.

"All tartans are plaid, but not all plaids are tartan," says DePasquale, a professional designer who has worked for haute couture clothing brands including Givenchy. "As a designer, it's such a fun textile to work with. It's more than a fabric design — tartan is a global brand that is sophisticated and rebellious, like the Scottish spirit." 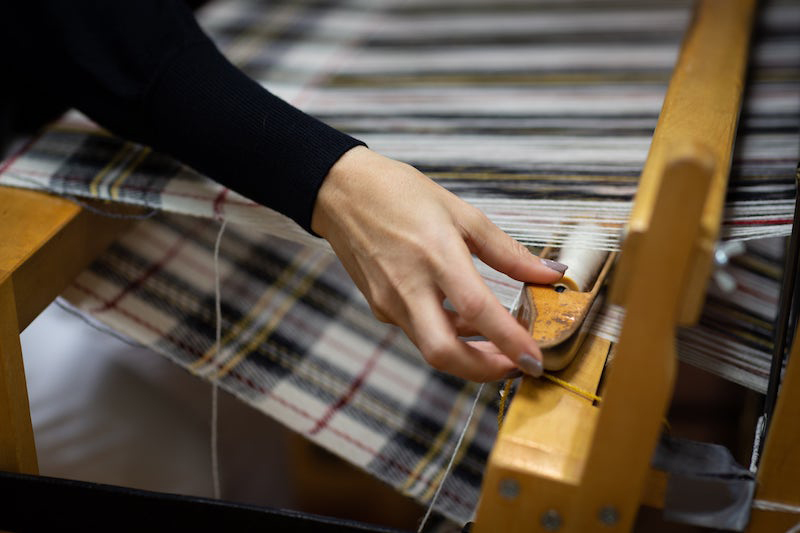 TOGA Heritage tartan is made at Frittelli and Lockwood Textile Studio in Saratoga Springs.

Inspired by her own Scots ancestry, DePasquale began work in 2015 to create a four-seasons "TOGA Heritage" tartan to represent her native city of Saratoga Springs. After two years of research, design and development, DePasquale's TOGA Heritage tartan was officially entered and archived in the Scottish Registry of Tartans in 2017.

That same year, DePasquale opened a TOGA Heritage brand and retail shop at 398 Broadway selling items featuring the tartan pattern and more. While TOGA Heritage belongs to the "corporate" class of tartans, it was designed with civic pride in mind using shades of black, white, red, grey and gold that appear throughout the city.

"The heart of the tartan is a sense of connection to a place," DePasquale said. "The TOGA Heritage tartan is steeped in tradition but has a modern style — it's classic yet contemporary like our beloved city. The colors I chose can be found popping throughout Saratoga — like the red and white awnings at the track — but are subtly infused into the design in a classy way."

TOGA Heritage tartan scarves, wraps and blankets are made locally at Frittelli and Lockwood Textile Studio located in the Beekman Street Arts District in Saratoga Springs, where the tartan is woven using fine New England wool.

"Anyone can find comfort in the stylish, traditional textile that is tartan. You don't need to be Scottish or have Scottish ancestry," DePasquale said. "The TOGA Heritage tartan is for anyone who is a Saratoga local or local at heart." 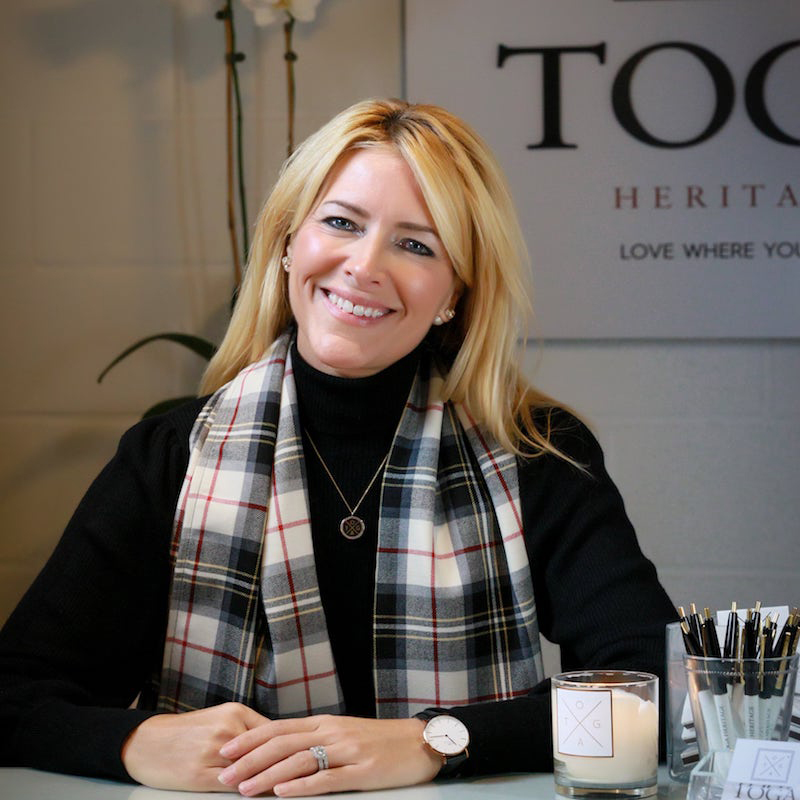 The mark or logo of DePasquale's TOGA Heritage brand is equally welcoming and inclusive, while also combining her love of all things Scottish and Saratoga. The letters "T-O-G-A," are arranged around an X within a square that resembles the "Saltire" or "St. Andrew's Cross" on the flag of Scotland. Beneath that symbol is the company name, which borrows the city's nickname used by locals and tourists alike, "Toga."  Then there is the tagline: "Love Where You Live."

All together, the TOGA Heritage name, logo, slogan and tartan amount to what DePasquale describes as a "lifestyle brand" that includes fashion, home decor, entertaining and pet collections.

"Everyone can get behind this brand that celebrates the whole Saratoga experience and not just the track. TOGA Heritage is about backyard family gatherings and golf at the Gideon. It's about concerts at SPAC, weddings at the casino, enjoying our parks and drinking from our springs," she said. "Everything I do at TOGA Heritage is about making and keeping traditions."

DePasquale asks those looking to join in on the Tartan Day celebrations to follow the TOGA Heritage Instagram and Facebook channels, where she will be publishing videos featuring a special bag pipe performance, a Scottish baking lesson and a Scotch toast.

For children, she made a tartan coloring sheet to share and she will be introducing a new "Togie" plush toy, hand-sewn in Saratoga using locally-woven TOGA Heritage tartan. Now that everyone is being responsible and staying at home, DePasquale said the mythical Saratoga Lake monster affectionately known as Togie is more likely to come out of hiding. A distant cousin of Nessie, Togie also wears a fashionable Scottish tam made from velvet. 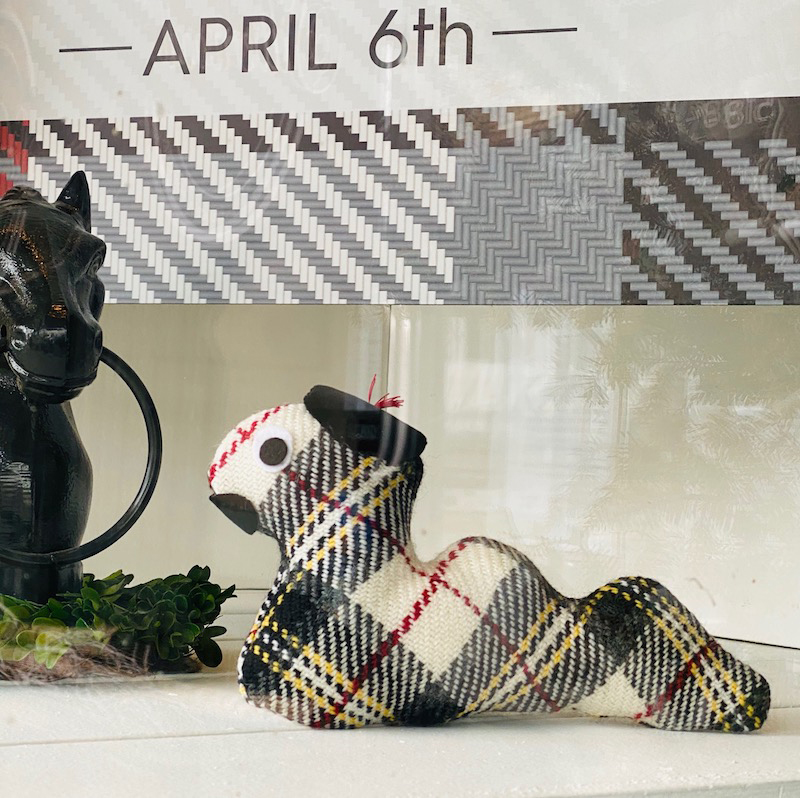 In 1998, the U.S. Senate declared April 6 to be National Tartan Day in recognition of contributions made by Scottish-Americans to the United States. Local celebrations are often held on the Saturday leading up to National Tartan Day — the largest is an annual parade in New York City which was called off in early March this year.

The date was selected in honor of the April 6, 1320 Declaration of Arbroath, a letter declaring Scottish independence from English rule and naming Robert the Bruce as lawful King of Scotland. The document, which turns 700 years old next week, is believed to have inspired the American Declaration of Independence, of which two signers were Scottish-born and half were of Scottish ancestry.

"We all know the role that Saratoga played in America's fight for freedom," DePasquale said. "Today, we are united in a different national fight against a dangerous virus. One of the goals of Tartan Day in Saratoga this year will be to inspire and remind people that we'll get through hard times together, as we have before."

For information, call 518-944-8951, email This email address is being protected from spambots. You need JavaScript enabled to view it. or visit  https://togaheritage.com, https://www.facebook.com/TOGAHERITAGE or https://www.instagram.com/togaheritage (@togaheritage) 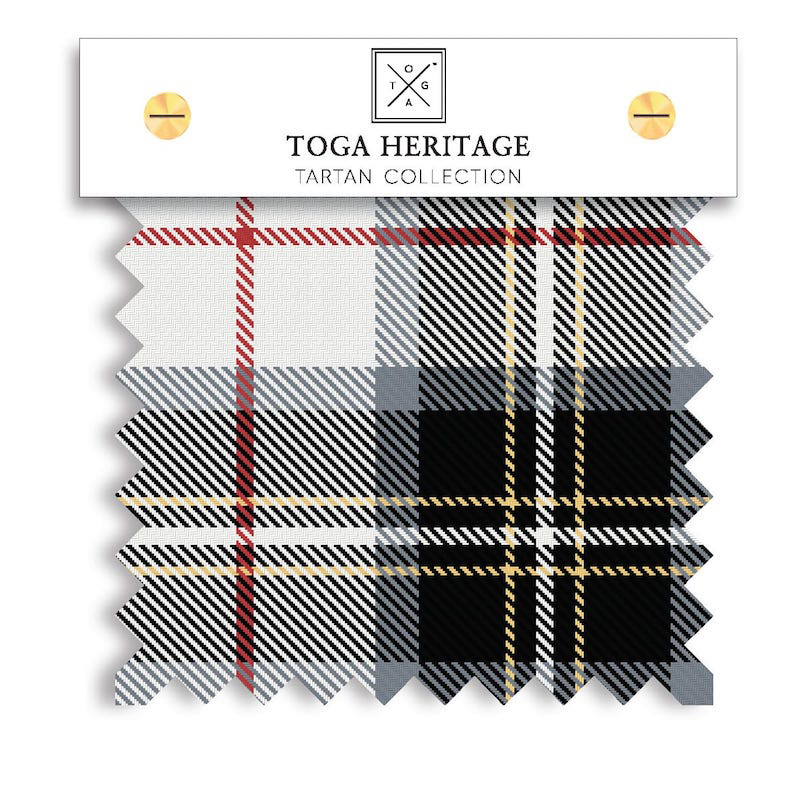 TOGA Heritage is a Saratoga Springs, N.Y. lifestyle company and purveyor of thoughtfully curated fine goods for home, office, celebrations, and giving. Woven throughout the collection is love for Saratoga Springs, past and present, and respect for the city's tradition of elegance, culture, play, and timeless design. Founded by Saratoga native Deborah DePasquale in 2016, TOGA Heritage distills the spirit of Saratoga into custom-made goods of the highest quality, so that locals and visitors alike can own and cherish that spirit in their daily lives, wherever they might be.

The store is located at 398 Broadway, Saratoga Springs (in the lower level of Silverwood Home and Gallery). Hours are Monday through Saturday, 10 a.m. to 7 p.m.

Contact Deborah DePasquale at 518-944-8951 or This email address is being protected from spambots. You need JavaScript enabled to view it.