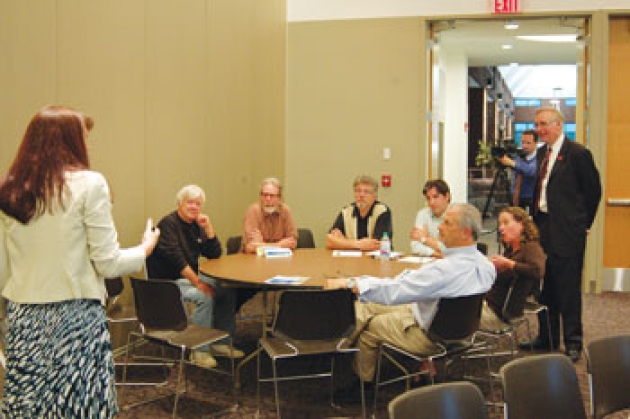 Left, Margaret Irwin directs a group during the first of several public workshops on the City’s comprehensive plan. Also pictured is, standing, far right, Charles Wait, one of 15 committee members.

SARATOGA SPRINGS — City officials held the first of several workshops designed to come up with a Master Plan for Saratoga Springs that will shape its future development; and over and over, residents expressed a desire for the City to continue to flourish, but at the same time, bring in more affordable housing to attract young families and to make the Spa City more walking and bike friendly.

“We are trying to identify the vision for the city,” said Jaclyn Hakes, project manager and director of planning services for M.J. Engineering and Land Surveying—the company chosen by city officials to facilitate the process and assist in updating the current plan, which was first drafted in 2001. City officials hope to adopt the new plan by this fall.

Hakes explained to participants that the updating of the comprehensive plan would involve several steps including the review of the existing comprehensive plan, which will be given a “report card.” The review will help the Comprehensive Plan Committee determine if that plan’s vision is still valid with the growth the city is experiencing.

She continued, explaining that the review will enable officials to determine what portions of the plan have been realized, what portions are no longer relevant and what could be missing. From this process, issues will then be identified and new goals established.

In the meantime, an analysis of the city’s demographic and economic trends will be initiated, and finally a new comprehensive plan will be developed.

Hakes then had participants, which included City officials, residents and business owners, approximately 40 people in total, into five groups. Several residents who had come to listen to the presentation left at that point and group facilitators guided participants into a discussion of five areas: what elements make Saratoga unique today; how they envision the city 10 years from now; what challenges do they see in enacting that vision; and finally, opportunities.

Margaret Irwin led one table into discussion, asking table members who included, among others, Jim Purdell, Mike Feeney and Lisa Nagle. Even so, each table seemed to be honing in on the same issues and desires.

Pluses given to the Spa City included community involvement, its vibrant downtown and the wide variety of year-round activities.

“What I am hearing is it is a sense of your history and what makes this city unique,” said Irwin as she listed over two dozen reasons on her board as to what makes Saratoga Springs special.

“People want to invest in this community,” added Nagle, a local business owner.

From there, the discussion turned onto what participants envision for the Spa City 10 years down the road.

“Assume, for this discussion, that what is on this list is still there,” said Irwin.

Participants across the board said quality schools—some are at their capacity—reinvigorating the West Side art movement and affordable housing were among the subjects mentioned.

In addition, participants expressed concern that not enough future impact vision was being used with the possibility of a full-fledge casino and the ever-growing GlobalFoundries.

But it was affordable housing that brought about the most discussions with residents admitting that unless it was planned for, it could be a mixed blessing.

“Not all young couples with children can afford to buy property in the city,” said another resident. “They can buy a fixer upper in the City for $300,000 or a brand new house in Wilton for the same price.”

Nevertheless, with expressed desires the Spa City remain a safe place to live; several residents voiced concern about the right approach to affordable housing, noting that unless it was spread evenly all through the Spa City, it could result in problems, alluding to the current issues with the Jefferson Terrace housing.

“Affordable housing needs to be integrated throughout the city,” said Nagle. “And not restricted to specific zones.”

Planning Board member Bob Bristol, agreed, adding that with recent crimes committed in the Spa City, including “three recent rapes,” one being “the rape of the wife of a local doctor,” said it was a delicate balance when creating affordable housing to meet the needs of the population, while also not creating future problems.

“The question is how do we create a safe environment and keep it safe,” he said.

Residents also uniformly expressed concerns that if a full-fledge casino opened in the area, it would bring additional problems to the area, including more crime, a higher transient population and “snowbirds.”