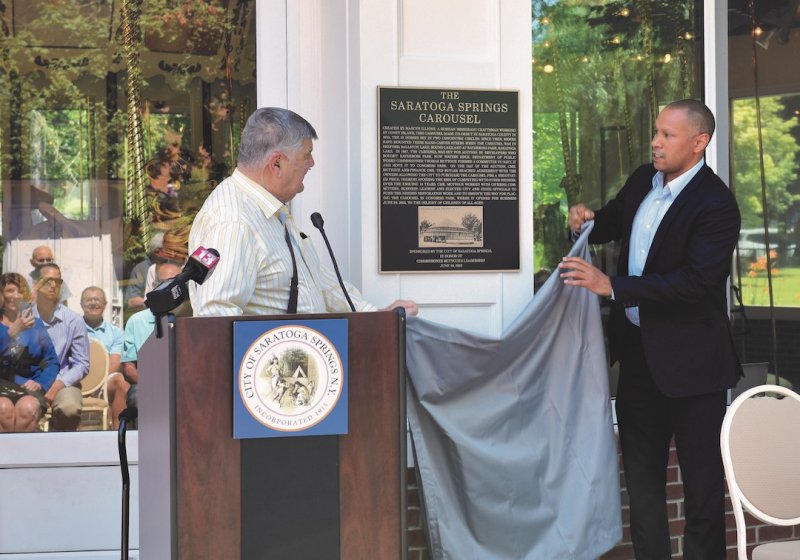 Former Saratoga Springs DPW Commissioner Tom McTygue, at left, and current Commissioner Jason Golub, unveil a plaque in Congress Park on June 29, 2022, detailing the history of the carousel and commemorating the leadership of McTygue. SuperSource Media

SARATOGA SPRINGS — A ceremony staged in Congress Park this week celebrated the 20th anniversary of the opening of the carousel in Congress Park and served to commemorate former DPW Commissioner Thomas McTygue’s 32 years of service on the City Council as well as his leadership role to save the carousel.

In its 20-year existence in Congress Park, the carousel has played host to about 850,000 rides. “To me, that’s (more than) 800,000 kids’ smiles, laughs, or who like my daughter, feel like they’ve found something magical. It brought us joy and happiness. I imagine that’s how everyone else feels who rides it for the first time,” said current DPW Commissioner Jason Golub.

“As with many things in Saratoga Springs, there had to be a long-term fight first, before getting anything done,” Golub added. It is a project that nearly didn’t happen. Following the closure of Kaydeross Park on Saratoga Lake, the historic Illions Carousel was slated to be auctioned off and dismantled.

Saratoga Springs City Council Minutes: Aug. 4, 1986: Mayor Jones received a letter from Robert Kohn, a partner in the Vista project at Saratoga Lake, offering to donate to the city the carousel at Kaydeross Park contingent upon their taking title to the property. Mayor Jones felt it would be imprudent to accept a gift of this magnitude - $250,000 if restored – and since we are in negotiations with them over this project, he would oppose the acceptance of any gift. There are many liabilities concerned. Comm. McTygue stated he would like to discuss this if it is going to leave the area rather than stay here in Saratoga Springs. He does not want to close the door on this at this time. The offer is contingent on the approval of his project.

In 1987, McTygue and former Finance Commissioner Ted Butler led a community fundraising campaign for the city to purchase the Carousel at the negotiated price of $150,000. An at-times heated community discussion about where to site the carousel followed for the next 15 years. McTygue remained adamant that it belonged in Congress Park.

“One of the main reasons I fought to keep this in the downtown business district is it opened up a whole new entrance to our park here,” McTygue said during this week’s ceremony. “People come here from other communities, to bring their children and grandchildren to ride the carousel and then being here they would shop in our downtown businesses.”

The Saratogian: Sept 1987, by Paul Cloos: The Saratoga Springs City Council Tuesday pledged to help buy the Kaydeross Park carousel at an auction later this month. If bought by the city, Public Works Commissioner Thomas McTygue said a likely spot for the carousel would be Congress Park. The 1904 carousel at Kaydeross Park changed hands as part of the $3.1 million sale of the park to the developers of Vista on Saratoga Lake. Vista developers plan 349 town houses and single-family houses in place of the park, which closes in two weeks.

“There are so many things I wanted to say…” McTygue told the assembled crowd of more than 100 at this week’s ceremony in front of the carousel, flanked by rows of towering trees and the vibrant hue of tiger lilies.

“I had a lot of help, and I couldn’t do this without leaning over to the other side. I know it upset some of my Democrat friends, but I really had to. When I first was elected in the ‘70s this community was predominantly Republican,” said McTygue, served on the city council for a total of 32 years from the early 1970s to 2008.

“When I first took over, this place was loaded with drugs, people sleeping under the tress, it was all overgrown. We decided we were going to get involved and clean this place up and that’s what we did.” He more than doubled his father’s 15-year tenure as councilmember. It is an achievement he never could have imagined. “Thirty-two years! But I’ll tell you with the Internet today, I probably wouldn’t have lasted three years,” McTygue said with a laugh.

The Gazette, May 30, 1998, by Rik Stevens: It’s an issue that comes around and goes around every couple of years, but this time, a city official thinks he’s found a home for the historic Kaydeross Carousel. Public Works Commissioner Thomas McTygue has plans to put the 93-year-old carousel in a new pavilion on the Spring Street side of the Canfield Casino in Congress Park. The city bought the carousel for $150,000 in 1987 from the new owners at Kaydeross Park, using a last-minute fund drive, corporate donations and city money. The horses were restored and have been stashed in an office in the Public Works Department, awaiting a new home.

The donations came in from everywhere. “The support we got from everybody…it was unbelievable,” McTygue said, whose eldest daughter, Lisa, read from a lengthy list of donors who had donated $5,000 for each carousel horse, those who donated funds to restore the horses, and those who helped fund the design and construction of the carousel pavilion.

Gordon Boyd read a list compiled of achievements accomplished while in office by McTygue, whom Boyd called “a native son and true friend of Saratoga Springs.” Boyd first met the then-newly elected McTygue in 1972. “I saw someone who had the desire and leadership capacity to make the city better. But he also showed a rootedness in the community stretching back generations, and the authenticity to rally the community behind his major initiatives,” Boyd said.  “The common element of all his ideas for Saratoga Springs was he approached them out of love for the community, and a joy in having the opportunity to serve. So that is why we are here today.”

To mark the event, the Saratoga Springs City Council approved a motion to offer free carousel rides for the day. Boyd stressed the carousel be seen as both a joy-filled experience in a special place as well as a metaphor of civic leadership and commitment that takes on all challenges for the betterment of
the community.

Assemblywoman Carrie Woerner read a citation that recognized McTygue’s contributions to the community in general and specifically for his “valiant, prescient and ultimately successful efforts to bring this carousel to this place.” The carousel was installed in Congress Park in 2002.

The event also honored the memory of late DPW Commissioner Anthony “Skip” Scirocco whom, despite being a political competitor, reached out to McTygue last year with the idea of acknowledging McTygue’s leadership at the 20th anniversary of the carousel.

“It was Skip’s gracious idea to celebrate Commissioner McTygue’s significant contribution to our community, and I know he would be proud to see us follow through on his wish,” current DPW Commissioner Golub said during the unveiling of a plaque detailing the history of the carousel and commemorating McTygue’s leadership.

McTygue looked at the plaque. “That’ll be here for a while,” he said.

More in this category: « Independence Celebrations Saratoga County Unveils Brand for 250th Anniversary of the Revolutionary War Commemoration »
back to top