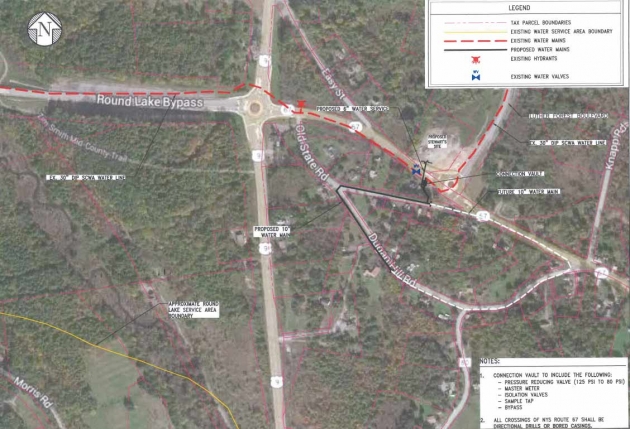 Stewart’s Seed Money To Make It Happen in Maltaville

MALTA— The town of Malta has been challenged with coping with some of Saratoga County’s greatest growth issues arising out of the as a result of the siting of GlobalFoundries at the Luther Forest Technology Campus.

Often the results have been regarded as haphazard: either overreaching or inadequate – a dozen roundabouts (with potentially more on the horizon) and the retail vacancies in the Ellsworth Commons project being two visible examples.

The Town Board, to its credit, has attempted to take a fresh approach. At the February 3 town meeting, they established a Route 9 South/Route 67 Rezoning Committee, which is charged with looking at the entire area in a comprehensive way to avoid individual “spot zoning” of parcels in this key gateway area to the GlobalFoundries plant.

This will be a developing story for quite a while, but there is a situation in process currently that, if adopted, can illustrate how growth and development can have multiple positive outcomes.

It may come as no surprise that this situation sprang forth from the private sector.

The Stewart’s Shops Corporation is advocating the formation of a Planned Development District and the Town Board has heard presentations by Mr. Tom Lewis, who is now a consultant but formerly was the company’s Real Estate Representative. Stewart’s has an option on a key parcel (see aerial map) along the roundabout located on route 67 and Luther Forest Boulevard – a key entranceway to GlobalFoundries and the LF Tech Park. It would like a building permit to construct a shop that would have gas pumps.

The desirability to Stewart’s to have this site is obvious; also obvious is the desirability of having a convenient gas/convenience store for the thousands who will be passing by to and from work at Fab8 and other sites.

Stewart’s would be able to hook up to an existing water main. As part of an incentive to receive a building permit for the site, they have offered the town the sum of $200,000 as seed money for the purpose of extending water lines along old Route 67 and Dugan Hill Road in a neighborhood known as Maltaville. Mr. Lewis had a representative from Saratoga Water Services verify that for that amount of seed money, a 10” water main could be extended 1000 feet, which includes lateral connections to individual (both existing and future) parcels as needed.

The next stages are to develop the final legislative language. There are some minor issues to be settled, such as the Saratoga County Water Authority taking ownership of the parcel upon which a water tower would sit. The water authority needs that provision in order to borrow money for the tower.  Mr. Lewis also indicated that he was willing to accept a contingency that Stewart’s would receive a building permit after the pipes were in the ground.

Once the legislation is finalized, an item can be put on the town board’s agenda that would schedule a public hearing. It appeared that everyone was going to push to finalize the language in time for this item to be on the next meeting’s agenda, which takes place on Monday, March 3, with a public hearing at the April meeting.

This could be an example of growth that works—a win/win for everyone concerned.

As noted above, Stewart’s option on the parcel is contingent upon receiving a building permit but “the optimist in me says this is going to happen,” Tom Lewis said.

More in this category: « 'Level Up': Spa City Conference Generates National Response Don’t Drop Out – Drop In! »
back to top