Malta Town Board: The Process of Progress 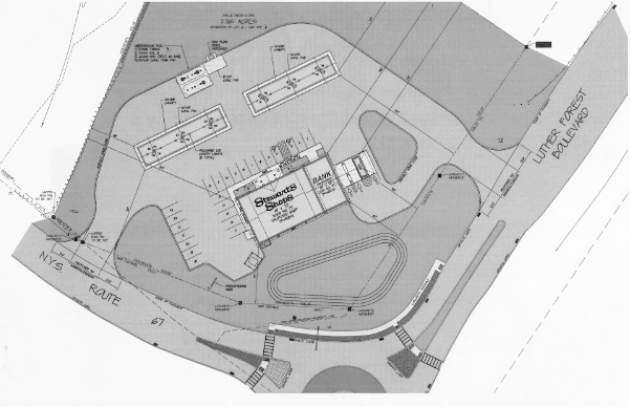 MALTA— The Malta Town Board meeting on Monday, April 7 brought about significant actions on two fronts:

The first was the adoption, by a 4-1 vote (with Councilman Peter Klotz voting against) of the adoption of the Stewart’s Planned Development District (PDD) #315, which would eventually lead to the issuing of a building permit for a Stewart’s Shops (with gasoline pumps) and an Adirondack Trust branch office.

This building would be sighted on the high traffic roundabout at the intersection of NYS Route 67 and Luther Forest Boulevard – on the way to and from the nearby technology park.

As noted in Saratoga TODAY’s issue of February 28, the Stewart’s Corporation has offered a sum of $200,000 in seed money to the town, to pay for the costs of construction extending water lines (via Saratoga Water Services) along old Route 67 and Dugan Hill Road in a neighborhood to several homes, in the nearby neighborhood of Maltaville. Stewart’s agreed to not receive their building permit until this condition was completed.

A presentation/public hearing preceded the final vote, the last in a series over several town meetings, that was delivered by Mr. Tom Lewis, who has retired as Real Estate Representative at Stewart’s, but was staying on to shepherd this project through the process.

At Monday’s meeting, he delivered his portion of the proceedings before an audience which included Charles Wait, Jr. and Mr. Lewis’ successor at Stewart’s, Chuck Marshall.

On February 28, the story was subtitled “Growth That Works” and despite Klotz’ dissent, it says here that this was a favorable deal for the town and for everyone concerned. It is an example of a good public-private sector partnership that any place, let alone the Town of Malta, should want to replicate as often as possible.

The epitome of win-win. As in you get your water; I get a make-your-own sundae and some unleaded on the way home from the tech park. Mr. Lewis scored on his final drive and those who have seen him in this arena before were not at all surprised with the result.

The second front concerned a trio of resolutions regarding what is labeled the Round Lake Improvement Plan, or more commonly “the roundabouts”. The town board voted, also 4-1, but this time with Councilman John Hartzell voting no, to formally seek determination of the town itself as the lead agency, and to authorize the town’s designates to begin the process of eminent domain on several parcels along the corridor by evaluating the public benefit and providing a calculation of ‘just compensation offers’ to the given landowners for their parcels, a mix of both commercial and residential properties.

Round Lake resident Woody Sloat, in the pubic comment period, reminded the town board that continued action on roundabouts was contrary to the wishes of over 500 petition-singing area residents (see: mymaltany.nationbuilder.com) and later elaborated:

“A number of citizens who live in this area consist of professional engineers, educators, doctors, lawyers and law enforcement professionals who work in highway safety every day. These residents refused to be duped by the slanted statistical data that supports the point of view of individuals who created their position based on profit. The residents’ genuine concern is safety and quality of life.” Mr. Sloat said.

“It is a big disappointment to see the town supervisor and three of his councilpersons dismiss the 514 residents who appealed to their common sense. Their poor decision will not be forgotten.”

More in this category: « $35 K on the Line Madigan: City of Saratoga Springs 2013 YEAR-END FINANCES STRONG AND IN THE BLACK »
back to top