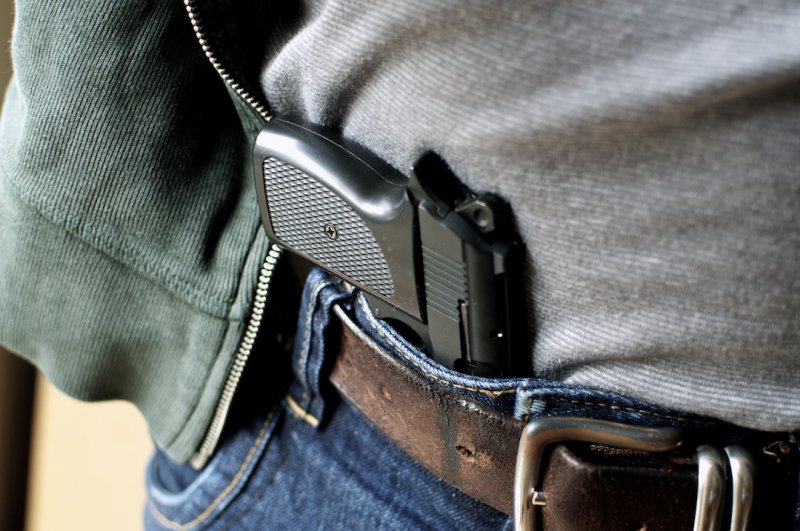 I am the grandmother sitting behind you at the movie theatre.

I am the young father shopping at the mall with his children.

I am the neighbor you see at church every Sunday.

I am a concealed carry permit holder.

I am the first line of defense should the unthinkable happen.

On Friday, July 1, with the stroke of a pen, Governor Hochul and her legislative cronies effectively nullified the Supreme Court of the United States; stripped New Yorkers of more constitutional rights; and made our state a little less safe.

• For the past century, residents of New York who wanted the ability to carry a concealed handgun had to meet the ‘Proper Cause’ standard which requires an applicant to demonstrate a ‘special need for self-defense.’ The criteria for this ‘special need’ are very narrow and make it difficult to acquire. Only 6 other states in the country have such a law, with the remaining 43 states allowing residents with a handgun license to conceal carry. (Some states have open carry, which means the handgun does not have to be concealed.)

• Two weeks ago, on Thursday, June 23, the Supreme Court ruled in favor (6-3) of New York gun owners, saying that all Americans have a right to carry firearms in public for self-defense. This overruled New York’s ‘proper cause’ requirement.

What seemed to be a big win for New York gun owners has turned into a nightmare as the abusive relationship continues between state government and its citizens. It is important to note that New York is already ranked among the strictest states in the nation regarding firearm ownership. Yet our elected, and unelected, officials threw a temper tantrum, rushing into extraordinary session.

Just to clarify, the new legislation has nothing to do with the infamous ‘safe act’ or assault weapons ban. This legislation places nonsensical new restrictions on legal handgun owners, such as:

Legal concealed carry holders will no longer be able to carry their firearm at the following locations:

Default of No Concealed Carry

The legislation also requires background checks for ammunition sales and creates a statewide license and ammunition database. This creates a time-consuming nightmare for both the consumers and business owners and will have no impact on criminal activity.

As a conceal carry permit holder I have the right to carry my handgun in public (in a concealed manner.) I choose to exercise this right whenever I am out with my family. I.e. Restaurants, church, shopping, etc.

Should the unthinkable happen, I am prepared to defend my family, and those around me, at a moment’s notice. In those critical minutes it takes law enforcement to respond, concealed carry permit holders can draw their weapon and nullify the threat. This means human lives saved and children/parents going home to their families.

Lest you think conceal carry permit holders are like cowboys from the wild west, I would say they are more comparable to silent guardians; they are scattered throughout society and they are well-trained.

All concealed carry permit holders go through comprehensive training prior to receiving their permit. This training consists of, but is not limited to:

•Completing forms and providing details of other individuals residing in the same abode.

•Provide the licensing officer with four-character references and “a list of former and current social media accounts of the applicant from the past three years.”

It is not surprising that only 7 percent of criminals in prison bought weapons using their real names, and fewer than 1 percent obtained them at gun shows. Studies of those imprisoned on firearms charges show that most often they obtain their weapons by buying them in black markets or stealing them.

It didn’t take much research to realize that cities with the toughest gun laws seem to have the highest shootings. This past 4th of July weekend in Chicago, 71 people were shot, with over 1,000 people shot year-to-date. Yet Chicago is known as a city with some of the strictest gun laws in the nation. Perhaps this is a societal and cultural problem, not a legal or gun problem?

In our unelected Governor’s own words “A week ago, the Supreme Court issued a reckless decision removing century-old limitations on who is allowed to carry concealed weapons in our state — senselessly sending us backward and putting the safety of our residents in jeopardy.”

This may be a shocking revelation, but violent criminals intent on savagery do NOT follow the rules of society, and they will NOT turn away from their intended target because a bunch of government buffoons wrote some arbitrary guidelines. With the stroke of a pen, Governor Hochul has penalized law abiding citizens and put our safety at risk.

I suggest our legislators and Governor leave law-abiding gun owners alone and focus their energy on issues such as bail reform which has placed thousands of hardened criminals back on the streets, placing us all in danger.

I have another suggestion for the Governor: She should relinquish her 24/7armed security detail and live like all her subjects, unarmed and overtaxed.