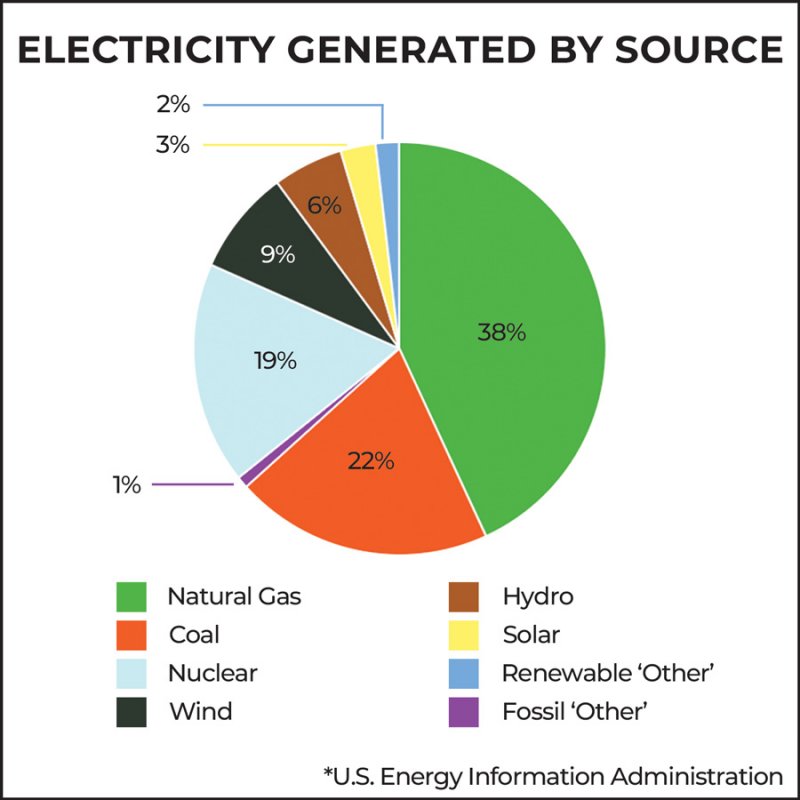 As you see in the accompanying graph, most of our electricity is still generated through the burning of fossil fuels. Yup, to power your electric everything, someone, somewhere, is probably still burning natural gas, coal, or some other fossil fuel. So, before you pat yourself on the back as an ecowarrior, realize that you too may be contributing to climate change.

Personally, I am excited for a future where renewable energy is abundant, and our reliance on fossil fuels dramatically decreases. Unfortunately, the technology just isn’t there yet. We can wish for it; we can hope for it; we can divert billions of taxpayer dollars towards it; we can even force people to change their habits; but we can’t change reality.

Taking into account Moore’s Law or similar theories on technological innovation, the pace of our progress in this sector will increase exponentially on an annual basis. Human ingenuity will eventually figure this out, but until then we need to keep the economy running, homes heated, and people fed. And that means burning fossil fuels.

Last Wednesday President Biden called the climate issue a “clear and present danger.” He then announced $2.3 billion in new funding as he previewed an agenda of executive actions. “Climate change is an emergency, and in the coming weeks I’m going to use the power I have as president to turn these words into formal, official, government actions through the appropriate proclamations, executive orders and regulatory power that a president possesses,” Biden said.

I couldn’t help but reminisce to a speech from 2009 where Al Gore loosely cited researchers and said there was a “75% chance” the arctic ice could be gone during at least summer months within five to seven years. So, according to former VP Gore, by 2016 the arctic ice shelves should have been melted.

I am happy to report that there are still 5.7 million square miles of ice, covering 10% of the planet. It is critical to note that VP Gore made a FORTUNE trading carbon credits during this period.

I personally believe President Biden came out with his emergency announcement to appease a certain voter base, and to ease his historically low approval numbers.

As far as the President’s executive actions and his $2.3 billion in new funding, let’s not forget the countless boondoggles related to the green energy sector which minted countless new millionaires. Most notably is the defunct solar power company, Solyndra. On March 20, 2009, Solyndra accepted a guaranteed loan of $535 million taxpayer dollars under the Obama administration’s revamped loan guarantee program. By the end of August 2011, little more than a year after hosting a presidential visit, Solyndra filed for bankruptcy. A half billion taxpayer dollars up in green smoke!

Are these ecofriendly companies truly altruistic, or are they simply raking in massive paychecks from the newest hot button? Your guess is as good as mine, but probably a little of both.

Getting back to the consumption of fossil fuels, I am always amazed that some Americans want to shut down, or heavily curtail, our fossil fuel industry. Mind you, these same Americans don’t slow down their travel; they still warm homes in the winter and cool their homes in the summer; they still use their cellphones (more than ever), and they still buy endless products produced from crude oil, they just plunder the resources from another corner of the planet. It appears we don’t care where the fuel comes from, we just don’t want it to come from the United States; and we aren’t concerned about the global environment, just our environment. This is selfish at best, and morally repugnant at worst.

These radical ecowarriors demand we change our lifestyle, but they aren’t willing to change theirs. And they fail to realize, or prefer to ignore, that the United States can produce the oil better, cheaper, and much cleaner than most of the world. Not to mention that becoming self-sufficient is good for jobs, the economy, and national security.

I will have to leave it for another time (sadly space is limited), but keep in mind the nuclear power option. While it may sound scary, it is one of the safest forms of energy production and one of the cleanest sources of energy regarding greenhouse gas emissions.

In closing, I urge everyone to embrace sensible environmental solutions while being realistic about our technological capabilities. Make as many little changes as you can to help the planet; invest in responsible green energy solutions; recycle everything possible; stop littering; compost; buy in bulk; eliminate disposable cups; donate old clothes; vacation locally; etc.

And for God’s sake, don’t get me started on a certain senator’s asinine, destructive, and fiscally disastrous green new deal.

Read 430 times
More in this category: « Unelected Consequences
back to top