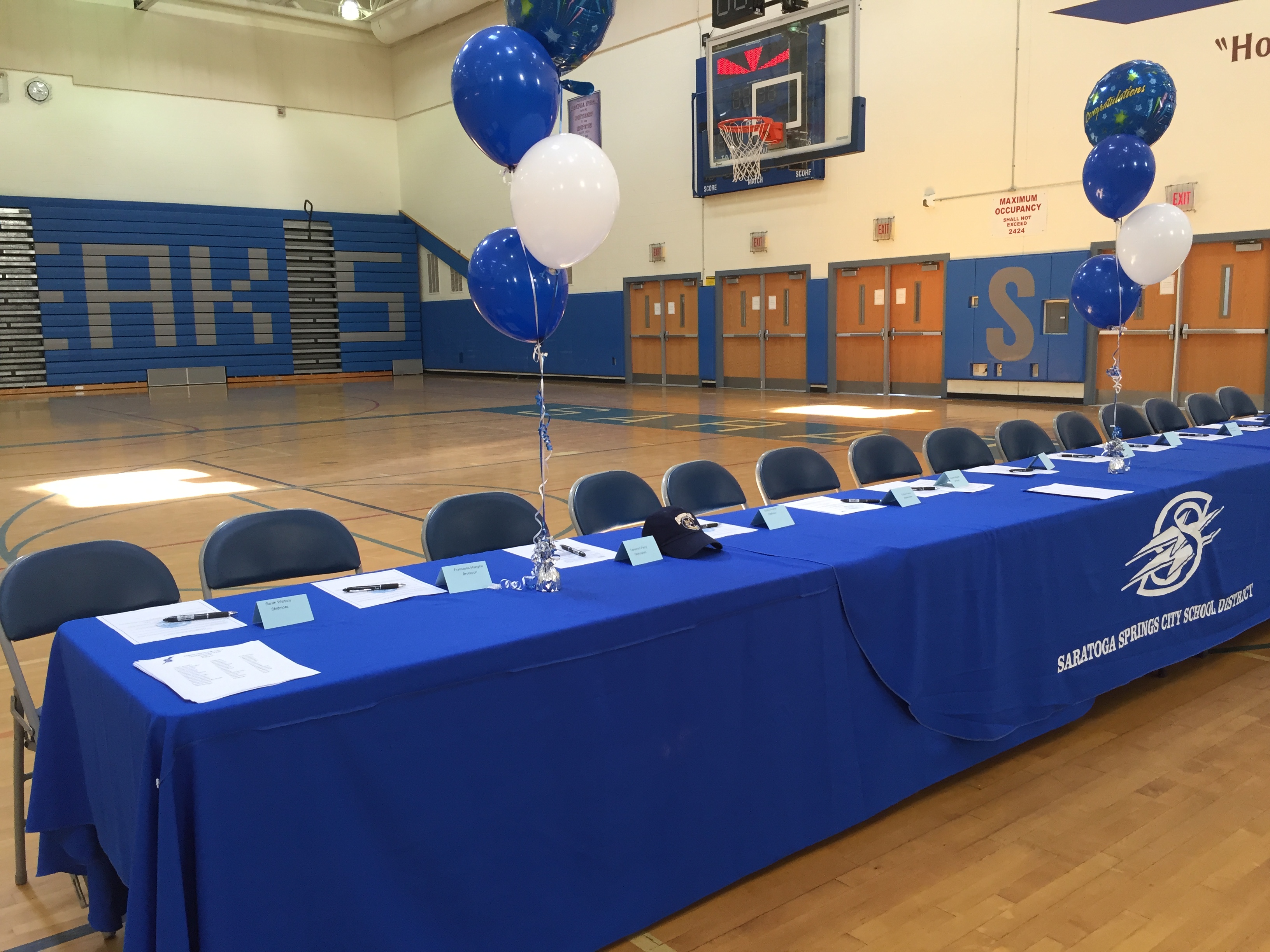 SARATOGA SPRINGS – A crowd of cheering friends and families filled the bleachers in the Saratoga Springs High School’s blue gym as 14 young athletes embraced their futures.
In a special ceremony held on April 12, the Saratoga Springs City School District honored 14 senior athletes as they signed their letters of intent to play inter-collegiate athletics at the universities of their choice in the fall. Athletic director Peter Sheehan addressed the attended crowd – which included other student athletes allowed to attend before their various practices and meets by their coaches – before the actual signings, thanking them for their attendance and congratulating the athletes on their achievements.
“We are so very proud of each and every one of you, and of the time and effort you’ve put in to make this day possible,” Sheehan said.
The athletes honored at the ceremony were, in the order they were seated at the table from left to right: Sarah Winters, who will play field hockey at Skidmore College; Francesca Mangino, who will play lacrosse at SUNY Brockport; Cameron Parry, who will play lacrosse at Quinnipiac University; Emily Fischer, who will play lacrosse at Clarkson University; Tucker Pierce, who will play lacrosse at Westminster College; Elizabeth Maguire, who will play soccer at Le Moyne College; Gabe Olsen, who will play soccer at Mount Ida College; Daniel Varsames, who will play soccer at Utica College; Michael Moran, who will also play soccer at Utica College; Autumn Boxley, who will swim at George Mason University; Victoria Breslin, who will swim at Le Moyne College; Morgan Hoffman-Smith, who will swim at Ithaca College; Nick Cavotta, who will run track and field at Winthrop University; and Mary “Mimi” Liebers, who will run track & field at the College of the Holy Cross. Griffin Taylor, who will play lacrosse at SUNY Oneonta, was not present at the ceremony due to attending a meet at his soon-to-be school, but he was mentioned by Sheehan and was present on the list of athletes at the ceremony.
“I just loved the campus as soon as I stepped on campus,” Parry said about her choice of Quinnipiac. “I knew that that was the place for me. The coaching staff was just really welcoming, and all the girls on the team were super welcoming, and I just really got a good feel for the team and for the… kind of program that I’d be going to.”
“I’m very excited,” Liebers said about attending Holy Cross in the fall. “I’ve always known I wanted to do college sports, and track has been my main sport for five years now. So getting to continue track in college is a dream come true… I wanted a D-1 program, but I particularly liked the Patriot League. And I just loved the school, and I knew I needed to see myself at the school without track, so it all just fell into place.”
“I was looking at schools in the south, and I found Winthrop, it has my major in business and a minor in sports marketing, which is just awesome for me,” Cavotta said about his choice of Winthrop. “It’s a beautiful school. It’s down south, lot of warm weather. Not a huge school, which I like, so I can get some more individual time with my professors. It just has everything I could look for in a college.”
“Super proud,” Cavotta’s mother said about her son’s achievement. “I like the school. Like he said, it’s a nice small school, homey, they focus on academics and education, and parent involvement.”
Notably, two of the athletes at the ceremony, Varsames and Moran, will be playing the same sport, soccer, at Utica. This is fitting, as they have been close friends for years.
“That’ll help a lot,” Varsames said about attending school with someone he is so familiar with. “We both know how each other plays. It’ll help team chemistry, obviously. We’re best friends, so it’ll be fun… [We’ve been playing together since we were] probably like around 10, 12 maybe.”
“I think we have an outstanding group of coaches, we have very supportive parents who allow our student athletes to have opportunities, both in-school and out-of-school, that kinda give them a chance to compete at the collegiate level,” Sheehan said about the SSCSD athletics program. “I think that’s important to have that year-round commitment and to have those year-round opportunities.”

More in this category: « Great Success at the Code Blue Needs You Road Race Athlete of the Week: Brian Hart Cinches the I-87 Cup »
back to top