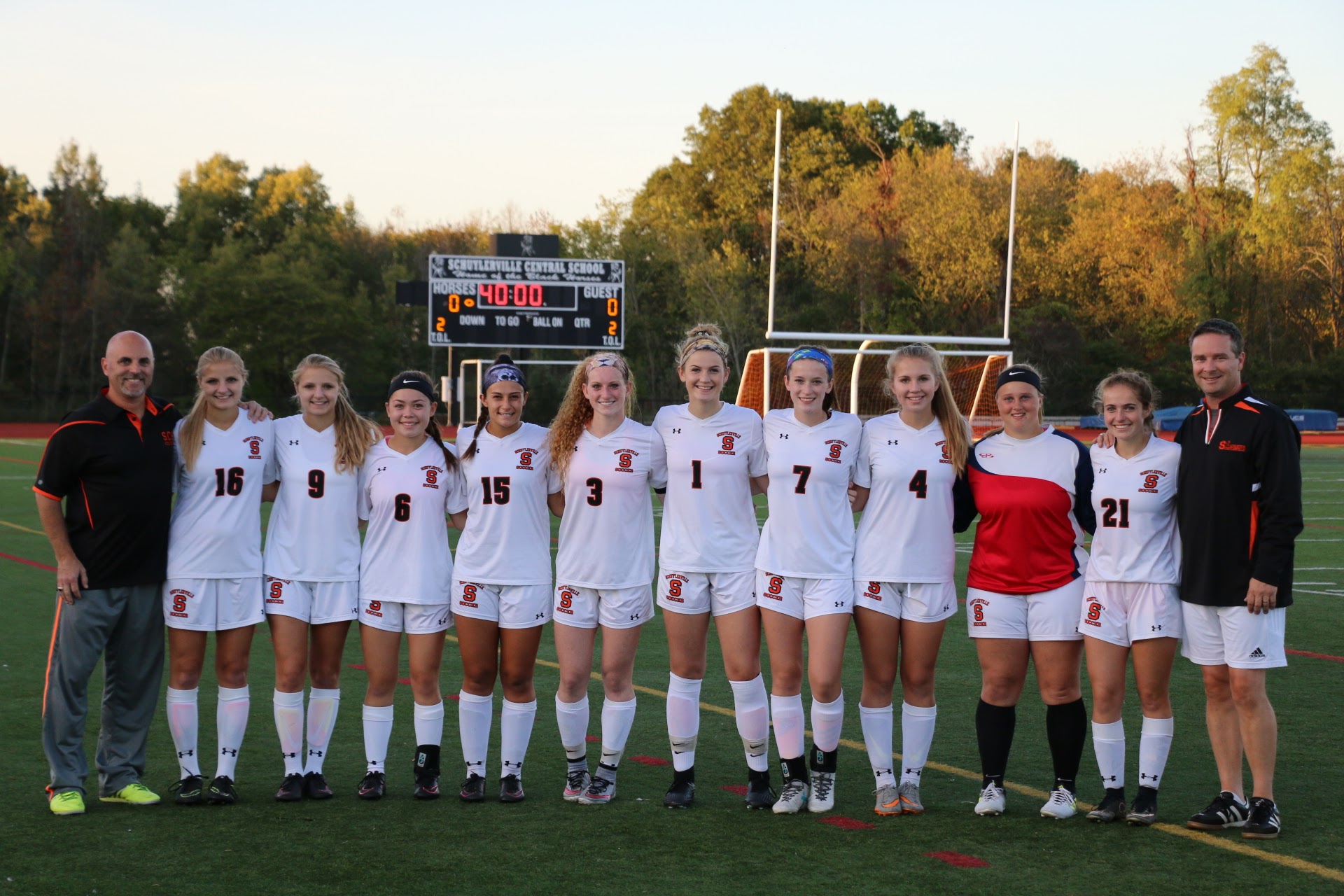 SCHUYLERVILLE - The Schuylerville girls varsity soccer team, coached by Michael Kopp, have had an amazing season so far. They are currently 10-2 in their league and in first place in Foothills North Division. In their senior game last Tuesday, they won against Amsterdam.

Pre-season started for them on Aug. 14, however, during the summer they had informal gatherings for eighth through twelfth grade to utilize the soccer field for an hour and a half a few nights a week in June.

Kopp has 10 seniors on his team, which he has been coaching for three years now, which he describes as a “blessing as a coach.”

So next season will be a new learning experience for him. Players from JV will be brought up and the familiarity of the practices, plays, and teamwork will be starting fresh.

“It’s the familiarity and the reality that all of that is coming to an abrupt halt. We are only guaranteed two more games. We take it one game at a time,” he said.

Schuylerville is a Class B school, which is based on student enrollment, but the conference that they play in is primarily Class A teams.

On Tuesday, Oct. 10, Schuylerville lost to Mechanicville, and it was the first home game they have lost since 2015. The other two losses this season were to Scotia and South Glens Falls, which were both away games, with both schools ranked very high in New York State.

“They handled [the home game loss] well. I think they knew the mistakes that we had made, which were few but against a top-level team. They all nodded their heads. They knew what happened. This is a very seasoned group,” he explained.

Schuylerville has one more league game left on Friday, Oct. 13 against Queensbury and then the sectional seeding meeting on Monday where it will be determined which seed Schuylerville will have, they will be in the top four. This meeting will also determine who they are playing against and when the game will be. Sectionals are at the end of next week and if they win, it will be the first sectional win for Schuylerville girls’ soccer.

If Schuylerville defeats Queensbury on the 13th, they will be the Foothills North champions.

“I think our mental attitude is where it needs to be at the start of every game and virtually for every minute of the game,” Kopp said proudly.

“These kids have been in battles against tough teams starting out as sophomores. They’ve tasted success; there is not a lot they haven’t seen. They take everything in stride and they don’t get down on themselves. When we lost earlier this year there were tears of shock. They weren’t down about it, they were shocked. Some teams get accustomed to a defeated mentality but we literally intend to win every game we go out there for,” he said.

Emily Vallee, a senior, is the reigning Foothill Offensive Player of the Year, which she won as a junior by being voted on by all of the coaches.

“Our main objection is to win a sectional title, which Schuylerville has never won so that has been an objective of the program since well before I got here. We’re on the precipice to do this year,” Kopp explained.

“The fundamentals and the tactics of the game have not really changed in the three years we’ve been playing together, but the skill level has,” he said.

“I always tell them, every time you touch the ball, it makes you a better player,” Kopp said.

More in this category: « Star Female Athletes of the Region Fasig-Tipton Fall Sales »
back to top