From the '94 Olympics... Speed Skaters Kristen & Jason Talbot - Where are they now? 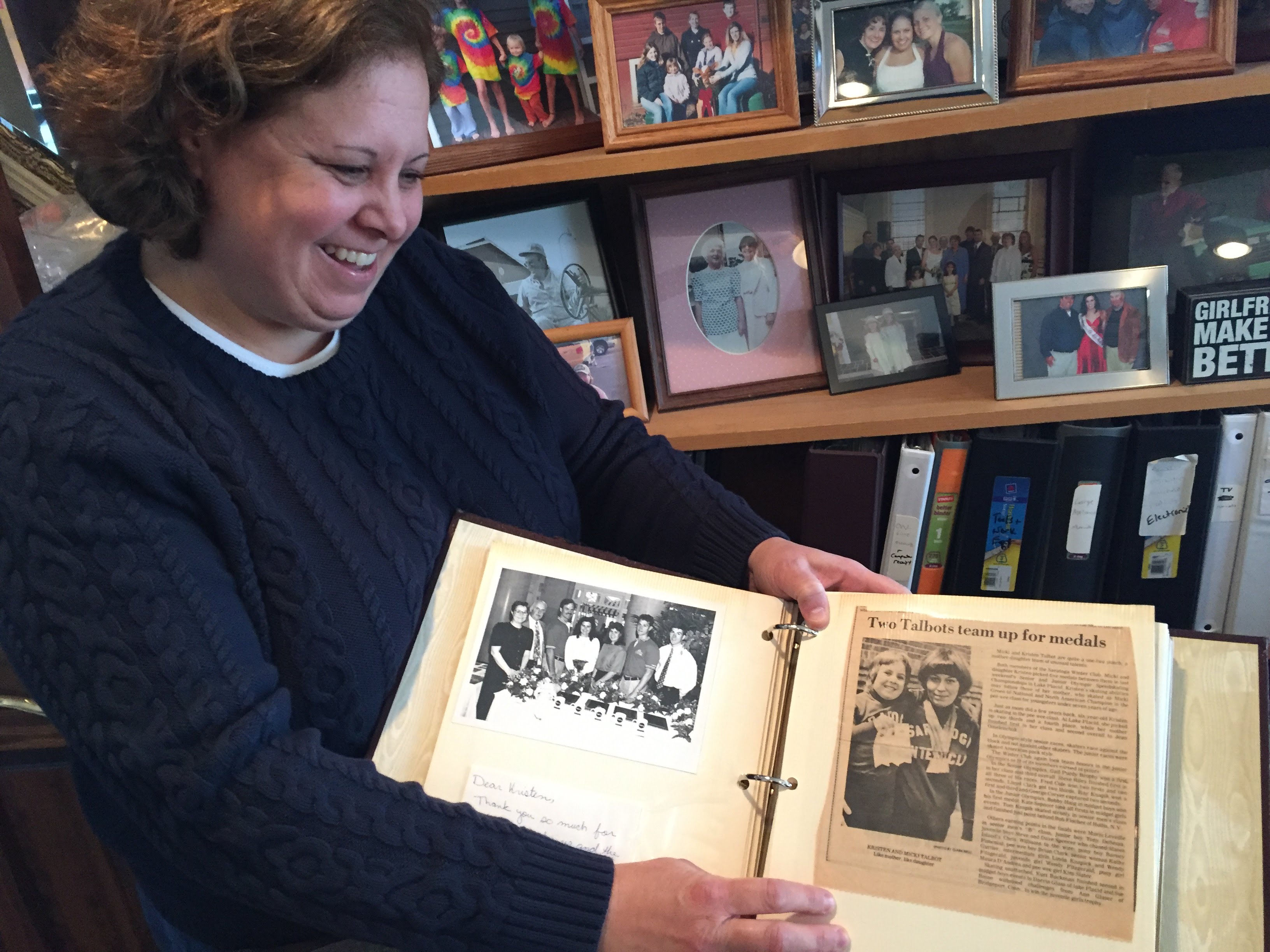 Nancy Kerrigan and Tonya Harding have been stealing the headlines again, thanks to a film, a “20/20” special and interviews with the man who clubbed Kerrigan’s leg. For several weeks before and during the 1994 Olympic Winter Games in Norway, the lead story every day was about Kerrigan and Harding. Concurrent to that drama 24 years ago, another story played out, but this story has a happier ending.

Five days after Shane Stant whacked Kerrigan in her right leg, ending her chances to defend her U.S. figure skating championship in Detroit, U.S. speed skater Kristen Talbot and her brother Jason Talbot were undergoing a life-altering procedure in Baltimore. Kristen, 23 at the time, had just qualified in Milwaukee for her third Olympics. Three days later, she was in excruciating pain donating bone marrow to help save her brother’s life. Doctors inserted a corkscrew-like device into several locations in her hips and withdrew one pint of bone marrow in a procedure that lasted two hours.

“It’s hard to describe the pain,” Kristen said during a conversation this January in her farmhouse living room. “Imagine if you slipped on the ice, both feet went straight up in the air and you landed directly on your hips. That’s what it felt like, every time they went in there.”

For Jason, a 19-year-old short track speed skater with amazing conditioning, it meant a sudden bout of headaches and fatigue. In the summer of 1993, he won 17 races at the Olympic Sports Festival Trials in St. Louis and had his eyes on the 1998 Olympics. A few months later, he was winded doing mundane activities. He visited his family physician, and after a round of tests, doctors thought it was either aplastic anemia or leukemia. Soon thereafter, he and his family visited Johns Hopkins Medicine in Baltimore.

Without a bone marrow transplant, Jason’s odds of survival were low. With a transplant, he was looking at an 80 percent chance of recovery. Two of Jason’s three younger brothers were matches, but they were too young for the procedure. Kristen was a near perfect match and held the “gold medal” for Jason.

Doctors loaded Jason with chemotherapy for a week leading up to the procedure so that his body wouldn’t reject the transplant. The normal white blood cell count is 10,000; Jason was at 41.

The procedure on January 11 went smoothly. Kristen was released from the hospital the next day and returned to Milwaukee to resume training, though now she had a physical handicap.

“It’s something I would do for anybody,” she said at the time. “I was ready to pack in the season. My family means more to me than anything else.”

BACK ON THE ICE

By late January, she was competing in the World Sprint Championships in Calgary, feeling like she was back on schedule. On February 7, just five days before the Opening Ceremonies in Lillehammer, Jason was released from the hospital. His white blood cell count was above 1,000, but he had to remain in Baltimore for daily treatments. Doctors told him that he probably wouldn’t have children.

Today, 24 years later, he has five children and lives in Glens Falls with his wife, Adrienne.

“Baylee, Madison, Tiernan, Muirenn and Cogan,” Jason said proudly, naming off his kids, who range in age from 18 to 6. “I won three national titles and made a couple of (national) teams, but my greatest accomplishment, in life, lays in those five names. This story has always been about family. My sister gave me the opportunity to make one of my own, and I’ll always be indebted to her for that. My sister isn’t just a former Olympian. She’s something we should all strive to be.”

Sportswriters and broadcasters at the Lillehammer Games caught wind of the Talbot story, and she quickly became a media darling.

“I don’t consider myself a hero at all,” she told them on February 11, the day before the Opening Ceremonies.

“She had been skating really well in the fall, and we didn’t want her to have to stop,” Blair told the media. “We’re all glad to see her here. She’s got a great attitude. If it had to happen to anyone here, she’s the best to handle it.”

Talbot had one more hurdle to cross before her race. On Tuesday, February 15, her grandfather Edward Joseph Talbot died at Saratoga Hospital.

Four days later, on a Saturday afternoon in Hamar, Norway, Kristen finally took to the ice and tried to focus on the 500 meters between her and the finish line. Kristen’s dad, Gary Talbot, was rink side in Norway, cheering on his daughter. Jason and the rest of the family were gathered in their Schuylerville home. She was shooting for a top-15 finish. She skated her fastest time of the season at 41.05 seconds and finished 20th.

Blair won the race with a track record of 39.25 seconds and claimed her fifth career gold medal. After the event, she said, “I respect her (Talbot) a lot of everything she’s been through. She’s someone that I really admire.”

“Lillehammer was an Olympics with mixed emotions,” Kristen said recently, reflecting on the series of events and her three Olympic competitions. “Jason was sick, so I was worried about him. The Norwegian people were so friendly, so welcoming, so in love with winter sports. They just loved hosting the world there. It was a pretty cool Olympics.”

So cool that International Olympic Committee President Juan Antonio Samaranch called them the “magic Games” and “the best Olympic Winter Games ever”.

Kristen and Jason’s mother, Michele “Mickey” Talbot said recently that the winter of 1993-94 was “kind of a blur. First, the excitement that Kristen was going to make another (Olympics) team, then we got the news that Jason was sick. We didn’t think Kristen would be able to go. You change your perspective at that point.”

After the Games in Norway, Kristen resumed training and racing in Calgary. “I ended that season thinking I’d keep staking,” she said. “But I got home and thought about life. In the spring of ‘94, I called my coach in Milwaukee and told him I was going to enroll in school,” she said. By the fall, she was enrolled at Russell Sage College in Troy to study physical therapy.

Meanwhile, Jason was recovering throughout 1994 and started college.

“I was trying to figure out if I wanted to skate again,” he said recently while sitting in Kristen’s farmhouse. “But just climbing stairs, I’d be out of breath. I had dedicated so much time of my youth to this sport. I was so close. People believed in me, told me I could make it.”

He started working at West Mountain in Glens Falls during the ‘94-’95 winter season to make money for school. He worked there for 11 seasons, then operated his own chrome-plating business for about 10 years before returning to West Mountain where he makes and grooms snow, manages lifts, welds, and fixes electrical equipment.

“It’s something different every day. I love that,” he said. “It’s not a desk job. And the cold doesn’t bother me.”

He last laced up his skates two years ago with his children at the Glens Falls Civic Center, wearing the same skates that he wore when he won a short track national title.

Kristen finished her master’s degree in physical therapy in 1999. A few months prior, she had torn her ACL and hobbled across the stage to accept her diploma. After her knee surgery, she recuperated with Matt O’Neil at Saratoga Physical Therapy Associates. He connected her with the Lexington Center in Gloversville, where she worked as a physical therapist full time for six years and now works there three days per week.

“She gives — whether skating, her studies in PT and now in her professional career — always gives 110 percent,” O’Neil said. “Knowing the epic part of the story then coming to know her personally, it is not surprising what she did, giving to her brother.”

Kristin did give speed skating one more try and trained for the 2002 short track team with Amy Peterson of Minnesota and others at the Saratoga Winter Club. Kristen fell short at national qualifiers, but Peterson made the team and carried the U.S. flag at the Opening Ceremonies of the 2002 Olympic Winter Games in Salt Lake City.

“It was a great experience, and I’m glad I did it,” Kristen said.

In the summer of 2003, Kristen attended the annual Bacon Hill Bonanza party, a pig roast and celebration for the community near the Peck farm in Schuylerville. Neil Peck, a sixth-generation farmer on the property, was asking a friend about Kristen. “I finally got the nerve to call her,” he said. Two summers later, they were married. Bonnie Blair was among those who attended the wedding.

Peterson returned to train with veteran coach Pat Maxwell and the Saratoga Winter Club for the 2006 Games. While visiting Kristen and Neil, she met Neil’s brother, Billy, and they were married in 2006. They live just down the road from Neil and Kristen with their four sons, ages 10 to 4. They are four of Neil and Kristen’s 17 nieces and nephews.

Neil and Billy manage the family farm. Together they own 1,200 acres, operate 2,000 acres, and grow hay and corn for their cows — all 800 of them. Their staff of 18 employees milk the cows three times daily, and their milk is sold to the likes of Cabot Creamery.

Neil and Kristen live in the original farmhouse, which they figure was built in the 1840s. Along with Gary Talbot, a lifelong carpenter, they gutted the home and rebuilt the inside. “We’re still working on it,” Kristen admits, pointing out some molding and a door that needs new paint. Her goal was to maintain as much of the original look and feel of the home, including the historic colors, but she did paint one living room wall a Schuylerville High School orange. A Black Horses blanket is folded and sits on the back of the couch.

Gary is still working as a carpenter and plays soccer in a 50-plus men’s league. Soon he’ll be helping his son Matthew and daughter-in-law Kelly rehab a home they’re buying. Michele retired from nursing after 30-plus years at Saratoga Hospital and Schuylerville Central School. She works in first aid at Saratoga Race Course in the summer. Together, they look after and enjoy their six grandchildren with one more on the way later this winter. In addition to the grandkids and their own five children, there are in-laws, and everyone lives within a short drive of their home where they host a big Sunday dinner every week.

“We don’t have any speed skaters,” Gary chuckled a bit when talking about his grandchildren. “But Jason’s kids ski, and they’re really good athletes.”

When the 2018 Games run their course in South Korea this winter, you can bet the Talbot family will gather around to watch, probably at Gary and Mickey’s house after Sunday dinner.

“We’re Olymp-aholics!” Mickey exclaimed. “It brings back a flood of memories. When we see families of a new Olympian on TV, it all comes back. To see the reaction of the parents in the stands … we’ve been there.”

Now isn’t that a story with a much better ending than Tonya and Nancy?