Skidmore Hockey Looks Ahead for Next Season

SARATOGA SPRINGS — Skidmore’s Hockey team has concluded their progressive season and is already looking ahead to come back stronger next season.

Their program finished 6-17-2 last year and bounced back this year and finished with a regular season record of 13-9-3 with an overall national ranking of 24th in the country out of 90 teams. Th eir focus for the next year is recruiting players who will share the same goal the team has established. 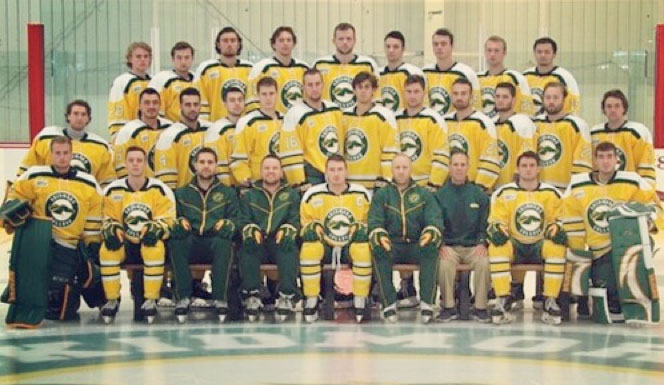 "I took this job because coach Hutch said he wanted to win a national championship within five years,” said assistant coach Shane Talarico.” We just got done with year two and we're coming off  a recruiting class that finished sixth in the country and we believe this recruiting class coming is going to be even better."

The team has 13 wins and are striving to get over the 15-win mark, in order to gain the opportunity to be a national tournament team. With such a close goal mark, the coaches are paying a lot of attention to the incoming class of recruits, who will match the talent already on the team.

"We just had a kid, Austin Rook. He just finished up his freshman year. He was on the all-conference second team, and he made the all-rookie team as a freshman."

After the team took a loss to Babson College at the New England Hockey Conference, the team is taking this as a learning experience.

“Babson is a team that we've had trouble with, not only this past year but over a lot of years,” said Talarico. “We really gotta get over that hump. It's important for us to come into the rink every day to get better and jump those elite teams."

Attendance for their games is in the top 25, meaning the team is already getting a great amount of support from the community and the college, which does not go unnoticed. Giving back to the community that supports them is a top priority for the team and their Stable Club have helped them to do so. This year Skidmore’s Hockey team played at a few fundraising “Hockey Night” events where the proceeds went to the Wilton Food Pantry and the Do it For Daron Foundation, which aims to raise awareness, inspire conversation and transform youth mental health.

"We were very fortunate. We had Adirondack trust and the barrel house that joined our Stable club and we would like to continue that with them,” said Talarico. “We really thank those guys for giving us opportunities to put fundraisers together."

More in this category: « Blue Streaks Take Home Championship Trophy: FIRST IN 30 YEARS! Vincent Santilli: Athlete of the Week »
back to top