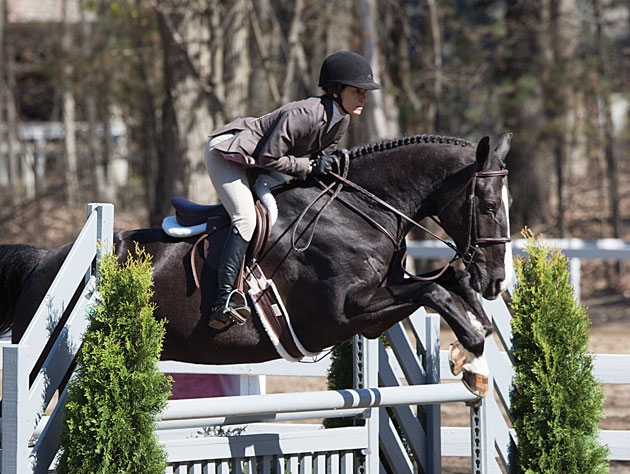 SARATOGA SPRINGS — The Saratoga Springs Horse Show is underway again for the 54th consecutive competition and second under the current name.

It has been almost two years since St. Clements Church handed over the reins in the summer of 2011. The transition to new management made things somewhat difficult, said Saratoga Springs Horse Show Corporate Officer and Secretary Lorna Olivo, who has been with the show since 1992.

They had to debunk the rumor that the show was no more.

“Because we had a lot of volunteers who had been doing this for many, many years, we decided that we could take it on,” Olivo said. “The first year a lot of people were saying the show was over (because of St. Clements stepping away), so we had to do a lot of social networking to up our profile again this year. It’s still the same purpose and still a lot of the same volunteers. Our mission is now to help others in the community.”

The show is indeed alive and last year the Capital Fund of Saratoga County, Inc. was still able to help give $45,000 dollars back to the community in 2012 after making the necessary improvements to the grounds’ infrastructure.

Along with Olivo and Horse Show Corporate President Tom Fueston, Treasurer Ron Peters is one of the three corporate officers for the show and only official members of the Capital Fund.

“We had the support of St. Clements when they passed over the show to us,” Peters said. “The community was very supportive of us and I think a lot of folks stayed with us and helped out to make it successful last year, which it was. Now we’re just using the same cookie-cutter again to bring it to the next level this year and I think we are. The numbers are on par with last year.”

Tuesday was school and practice day for the horses before the event kicked off Wednesday, May 1. At that point the show had 435 stalls booked for the first of the two weeks of competition with more coming in that day, giving people like sponsorship coordinator Peggy Lynch hope to do even bigger things this season.

The first outdoor USEF AA rating and USEF Jumper 4 rating show in the Northeast also has a number of different looks this year. One of those is the location of the non-profit vendors, who usually sit outside of the show at the NYRA property, are now able to set up around the competition on the Yaddo Showgrounds. The show also has four more corporate sponsors this year, which are named on the jumps.

Another addition is the $2,500 Thoroughbred Hunter Division, led by head of the New York State Breeding and Development Fund, Tracy Egan, who is trying to help give thoroughbreds a second career after retiring from the track.

“This is an excellent venue,” Olivo said. “Once they’ve retired, they don’t have to race anymore but they can do this.”

Artist JC Parker also donated a watercolor painting and poster, of a horse and rider, which will be showcased and auctioned off during the two-week event. The Capitol Fund will also use the proceeds of the sale and poster to benefit non-profit organizations. The charity event will further donate to non-profit organizations in Saratoga County that are helping others, primarily soup kitchens, food pantries and shelters.

Riders from all over the east coast from sates including Florida, Georgia and Massachusetts will be competing in the hunter, equitation and jumper selection, which have a combined over $160,000 in prizes to the equestrians. It’s also a time for the riders to accumulate points for championships and future Olympians as the summer circuit kicks off.

Despite the closeness to the Saratoga Race Track, the next two weeks of competition at the horse show continues to provide a sport of a separate entity.

“It’s a different type of venue because they’re jumping,” Olivo said. “It’s a more graceful type of thing. It’s not just a horse running past you at 50 mph. So you get to see and experience it a lot better. It’s something where they can get up close and personal here, more so than at the track because you’re there with 50,000 other people. Here you’re sitting right at the fence.”

General admission is $3 and children under 12 get in as the first part of the show continues through Sunday, May 5 and starts back up again for the second week on Wednesday, May 8, through the following Sunday.

More in this category: « Malta Balloons Provide Visual Impact of Fab 8.2 Post Positions for Kentucky Derby Are In »
back to top