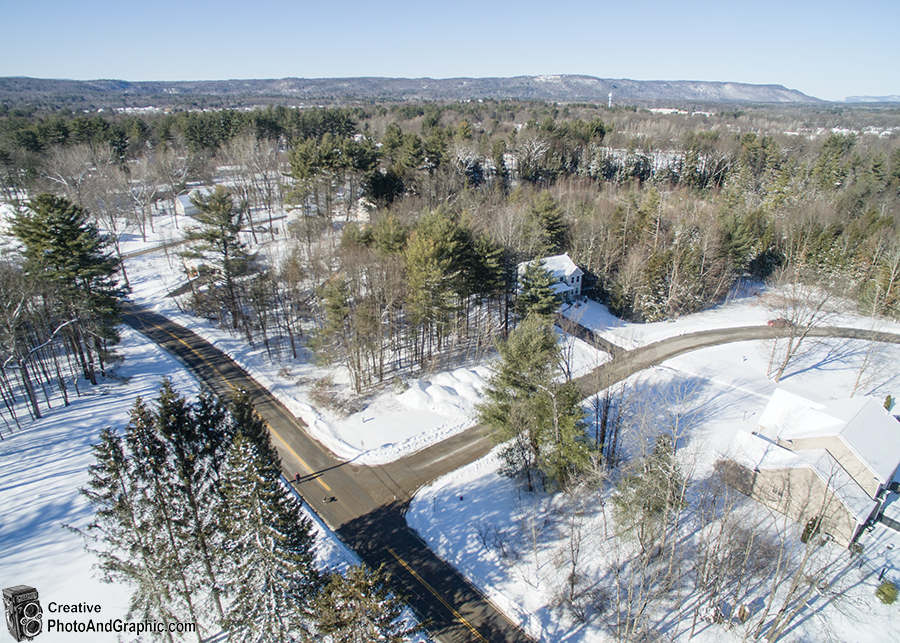 An aerial view of Gailor Road and Tawny Terrace in Wilton. Photo by www.photoandgraphic.com.

WILTON – On the first night of February, the Wilton Town Board unanimously approved the establishment of a special taxing district for a proposed housing subdivision south of Gailor Road, moving the project one step closer to actual construction.

Ryan Riper, the town’s director of engineering and planning, said he expects the Canyon Run Extension site plan to be presented at the Wilton Planning Board meeting on Wednesday, Feb. 21, for a final vote of approval.

The Queensbury-based developer Daniel Galusha and Sons will install drainage infrastructure and a new town road. Galusha then plans to start building 44 new homes, which will be located just west of the Adirondack Northway’s southbound lanes and across Gailor Road from existing homes on Tawny Terrace and Dakota Drive.

A fourth stage—the town board’s approval of a new taxing district—was required for the Canyon Run Extension proposal to advance.

The Feb. 1 vote followed two years of drawn-out negotiations between town officials and Joe Dannible of the Environmental Design Partnership, who assists Galusha in preparing his site plans.

The inclusion of adequate storm water drainage in the affected area was one of several matters discussed.

Riper said that only the new homeowners in Canyon Run Extension will pay a $42 annual fee for the drainage district as part of their property tax bills.

After last week’s vote, longtime Wilton Planning Board Chairman Michael Dobis offered that he views the Canyon Run Extension project in the context of a recent upswing in local development.

Progress seemed to stall in Wilton when the “building boom died” in the late 2000s, Dobis noted. “Over the last three years, things have really started picking up in the area,” he added.

Dobis said he is used to the “dirty looks” he observes among both local residents and fellow board members, whenever subdivision projects make their way through the approval process.

Dobis said his role, as the planning board chair, is to ensure that board members and local residents are equally “educated” and heard in regards to each specific proposal.

“We’re here for the public. I have no problem if people ask reasonable questions,” Dobis said. “We want to make sure we get this right, and that there’s nothing left to chance.”

More in this category: « Malta Welcomes Two Women, Waits on Engineer Milton Planners Give Condos Final Approval »
back to top