Drive Up & Drive Through 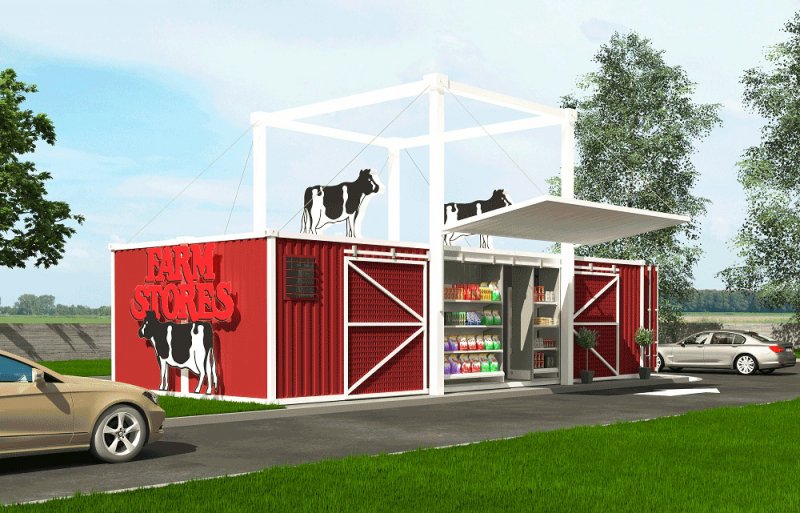 Concept image of a Farm Store. Courtesy of Farm Stores.

HALFMOON — A drive-thru convenience store may be coming to the region.

Farm Stores are drive-thru convenience/grocery stores in retrofitted shipping containers that resemble red barns. Drivers pull up on parallel sides of the building to view merchandise – dairy, eggs, fresh-baked bread, produce, beverages, and more – through the windows. A clerk working inside takes and bags orders.

An article done by the Albany Business Review states that a developer of Farm Stores has already purchased a 0.67 acre plot of land at 9 Route 236. This plot is across from a Stewart’s, and a few miles down the road from a Trader Joe’s that is currently under construction.

Olivia Huffman, a commercial real estate broker at RedMark Realty out of Clifton Park, exclusively represents Farm Stores and confirmed that the developer who purchased the land is Pointe Companies. Huffman also said that there are a minimum of 10 locations in upstate New York where they are looking to build more Farm Stores. Franchisees Richard and Angela Barone will be opening one soon in Wappingers Falls.

Richard Harris, the Director of Planning & Building for the town of Halfmoon, says that they have not yet received an application or concept plans for the Farm Store, and that the approval process could take approximately 2-3 months. However, Harris believes that it could be a positive commerce opportunity for Halfmoon, and might help to spread out traffic near other businesses in town.

More in this category: « Saratoga Arts Welcomes Ian Berry to Board of Directors Ask the Expert... Helping Seniors Make their Move »
back to top