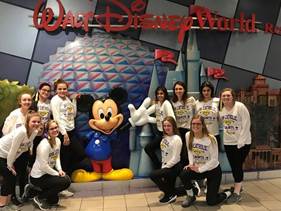 SARATOGA SPRINGS — In March, the varsity softball and baseball teams, coached by Brett Simpson and Alphonse Lambert, respectively, went on a week-long trip to Disney World in Orlando, FL for a week of training and scrimmaging. This was the first year the softball team was able to attend, and the baseball team has gone several times in the past. Both teams do multiple fundraisers to attend from selling coupon books to 50/50 raffles.

“While the girls weren’t playing games or practicing, they were free to go to the parks and downtown Disney. Part of the package they get is a 5-day park and hopper pass, meaning they can go to any of the parks for 5 days. We are there for six full days, so the girls were in the parks every day or laying by the pool relaxing.
We took Easter Sunday off from playing and attended Easter mass, along with the boy’s program. This was something special for us to partake in Easter mass, as a whole,” Brett Simpson explained.

Simpson had plenty of thank you’s to disperse: “First to Brooke O’Reilly who without her we wouldn’t of been able to do this trip. She is awesome! To the parents who helped fundraise and help look over the players while in Disney. It’s awesome to not only play in Florida, but then to have multiple parents down there to watch and support the team makes it that much more special. To the School and our AD Alphonse Lambert for allowing us to make the trip and supporting us in this journey. And lastly, to the players who made our job easy while down there. They behaved well and played well. Seeing the smile on their faces every day made it that much more worth it. Thanks again to everyone else involved, can’t wait to be back next year.”

More in this category: « Local All-Star Moments Athlete of the Week: Lindsey Frank »
back to top