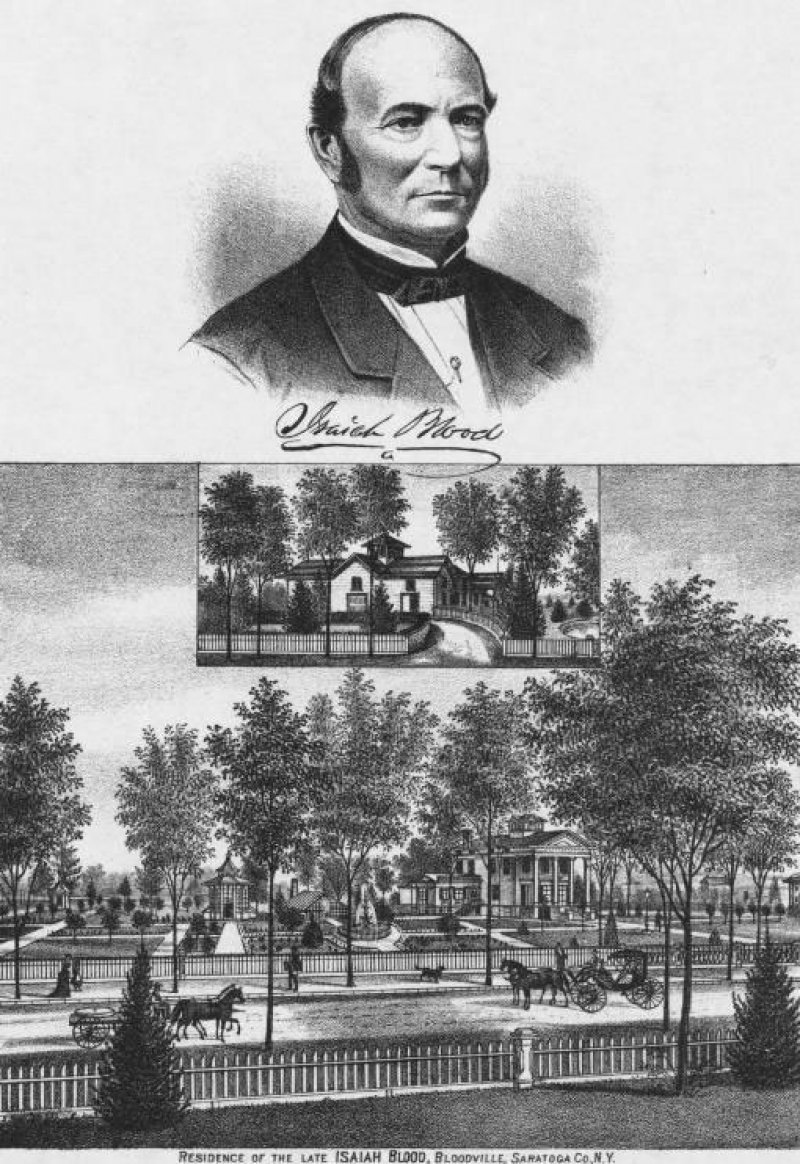 A man with the ominous-sounding name of Isaiah Blood, born on February 13, 1810, once operated one of the largest tool factories of its kind in the state along the Kayaderosseras Creek 150 years ago.

The Ballston Scythe, Axe and Tool Works shipped hundreds of thousands of quality hard-edge tools around the world for decades on end.

Isaiah’s grandfather died at a relatively early age, so when John Blood moved to the town of Ballston in 1792, he brought along his nephew Sylvester. John was one of the signers of the deed of incorporation for the Ballston Baptist Church. However, by 1810 he had left Ballston and moved to New Lisbon, NY.

Sylvester remained behind and purchased his uncle’s land on the Mourning Kill. He built a house on the corner of present-day Brookline Road and Route 67, which, although rebuilt over the years, still stands today. John had trained him well as a blacksmith, so he was able to make a good living by manufacturing scythes for local farmers.

Isaiah apprenticed in his father’s scythe shop. Sylvester decided to expand his operations to use the more robust waterpower of the Kayaderosseras Creek just north of Ballston Spa. Upon Isaiah’s marriage in 1831, Sylvester gave him the choice of taking over the new scythe shop or a retail store that he owned. His son chose the scythe shop and almost immediately began a steady expansion of factory buildings and tool lines. At the peak of operations in 1870, Isaiah’s factories employed 300 men and produced over 800,000 scythes, axes, and other tools annually.

In addition to his legacy as a businessman, Isaiah was elected to several political offices, including supervisor of the town of Milton and as an Assemblyman and Senator in the State Legislature, a post he held at the time of his death.

His passing came in a most unexpected manner. In the summer of 1870 he was suddenly struck with typhoid fever, an illness brought on by ingesting contaminated food or water. As was the case with Blood, the illness typically is accompanied by high fever, headaches, coughing, abdominal pain, and delirium. In modern times it is almost always successfully treated with antibiotics, but in the 1800s there was no cure.

The affliction advanced and retreated, giving some hope, but by mid-November it was clear that he would not recover. When he finally realized that the end was near, he requested that all of his employees be allowed to visit his bedside. According to the Ballston Journal, “Each and all silently approached the couch of the dying man, who had been to them not only an employer, but a true friend and counselor, and pressed his hand as it lay upon the covering of the bed—the Senator being too weak and feeble to extend it to those who approached. The scene was most impressive and many a stout heart was moved to tears at this silent but touching evidence of the warm affection that existed between the stricken employer and his bereaved workmen.” He quietly passed away in his home on November 29.

It can be said that Isaiah Blood is the “forgotten” entrepreneur of Ballston Spa, despite the fact that the hamlet of Bloodville is named after him. His scythe and axe works were famous throughout the country, but few documents survive to this day that describe his personal accomplishments and motivations.

One reason Blood’s legacy faded so quickly was the destruction of both of his main factories and the extinction of his direct family line. Although his son-in-law continued to operate the business for 20 years after Blood died, both the scythe and axe factories were completely destroyed by fire in 1900 and never rebuilt. This sudden and complete loss was devastating to the hundreds of skilled workers employed there, most of whom were forced to move away. Blood’s own son died at a young age, as did his daughter’s children, so that by the 1920s there were no direct descendants left to carry on the family name.

Timothy Starr has lived in the Capital Region since the age of 6 and published 18 local history books. He wrote a biography of Isaiah Blood and a short history of the Blood family in 2010. He can be reached at This email address is being protected from spambots. You need JavaScript enabled to view it..

More in this category: « The Whole Story of Ballston’s Miss Heaton 1820 Religious Revival in Malta, NY »
back to top