Jeweler by Day, Criminal by Night: The Secret Life of Nelson M. Knickerbacker 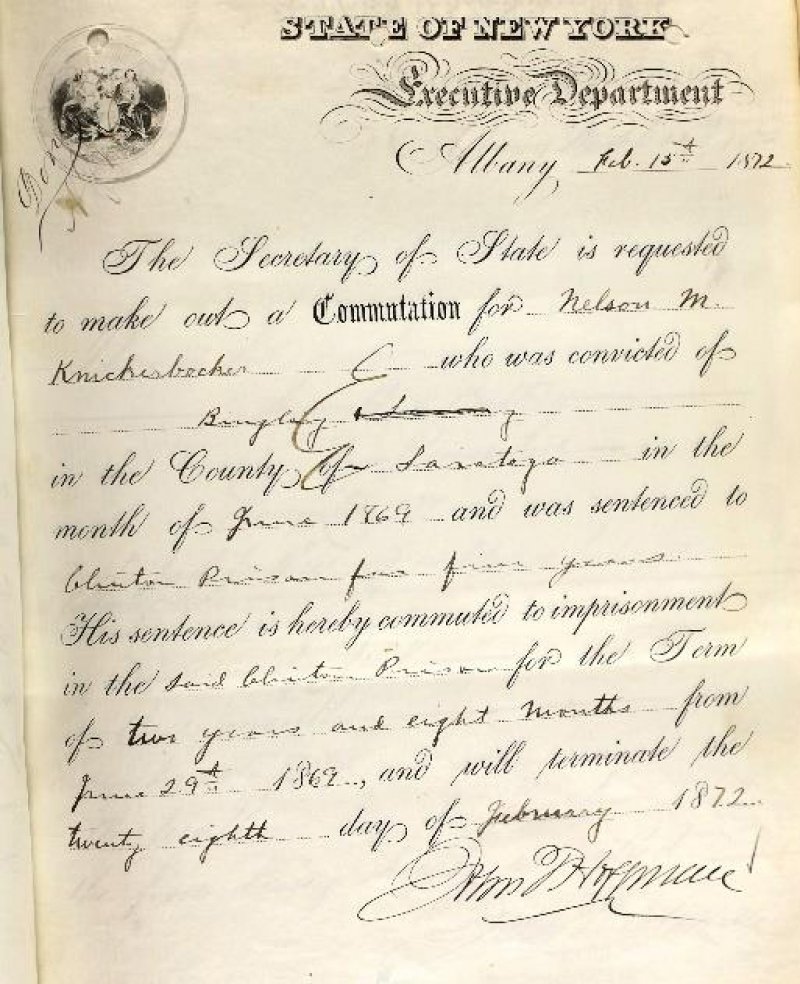 Beginning in the early 1860s, break-ins began taking place at businesses across Saratoga County. The method was always the same, an office was entered and the safe was emptied and then relocked. The only outward evidence of theft being the owners’ inability to open the safe. When expert locksmiths were called, they often could not reopen the safe.

At this point, the business would turn to a local man well-known for solving such problems, Nelson M. Knickerbacker. Inevitably his skill would prevail, though always revealing the loss of any valuables the safe had contained. Knickerbacker was born in December of 1844 in Saratoga Springs. He was one of ten children of Peter & Violetta Knickerbacker of that city. By the age of 22, he had established himself as a jeweler but then sold his business in 1866.

Henry L. West’s store in Ballston Spa was the next to be hit. Knickerbacker, who had been employed by West on occasion over the previous five years, was present when the store closed on the night of the burglary. Knickerbacker quickly became the prime suspect and was arrested on June 6, 1868. As he was not considered a risk of leaving the area he was released on bail.

Eight months after Knickerbacker was released on bail, the safe at the Saratoga Springs jewelry store of E. R. Waterbury was found to be inoperable. After two days of unsuccessful efforts by professional locksmiths, Knickerbacker was called. He quickly opened the safe, revealing that gold watches, diamonds, and jewels worth several thousand dollars had been removed. A short time later another Saratoga Springs jewelry store was robbed in a similar manner, the owner John Frost also reporting a substantial loss.

At his trial, the accused’s comparatively weak defense did little against the prosecution’s overwhelming evidence. Knickerbacker denied being involved in the crime, backed by his mother’s claim that she was “certain that he was home” the night of the robbery. Others who spoke on Knickerbacker’s behalf were boyhood friends whose testimony was summed up with “his character was always good up to the time of this charge.”

The jury quickly returned a verdict of guilty. On June 29, 1869, Nelson M. Knickerbacker was sentenced to five years of hard labor at Clinton Prison in Dannemora for burglary and larceny. Through the efforts of friends, his sentence was commuted to two years and eight months and he was released on February 28, 1872. The prison incorrectly reported his last name as Knickerbocker.

Either immediately before sentencing or while in prison, Nelson married Phebe Sadler, his bride living with her parents in Saratoga Springs while he was in prison. After his release from prison, Nelson and Phebe moved to Milton, Saratoga County. Knickerbacker returned to the jewelry business, opening a store in Ballston Spa. As his business prospered, he moved his family to the village.

In what was later called “alarming frequency,” safes were again found inoperable in Ballston Spa and the surrounding area. As an acknowledged expert, Nelson Knickerbacker would often be called to make the repairs. Charging twenty-five dollars for his work, the safe when opened would be empty.

Throughout his years in Ballston Spa, Nelson Knickerbacker was known as a gentleman of good habits with a family who was highly regarded in the community. Even with his previous criminal background, it was this perception by the town’s citizens that kept quiet the suspicions of his involvement in the crime wave.

The mystery safecracker was finally revealed on a cold winter night in December 1890. That evening, Richard Cunningham entered the ax and scythe factory at the northern edge of Ballston Spa to fill the woodstove. He was surprised to find that his key would not fit in the lock. Finally forcing the door open, he was startled to see Nelson Knickerbacker standing in the office. The intruder explained that he had seen a man leave and had entered to investigate. The police were summoned and Knickerbacker was taken into custody. On his person were found a loaded five-barrel pepper-box revolver, a dark lantern, and a set of hand tools.

In May of 1891, Knickerbacker was found guilty of an attempt to commit a burglary in the third degree. The jury’s recommendation for mercy was denied and he was sentenced to two years and six months of hard labor. His daughters, Gertrude and Maude, cried hysterically while he was sentenced and led away. After his release, he returned to Ballston Spa and his family where he again took up his profession as a jeweler.  Nelson M. Knickerbacker died of pneumonia in 1914 at the age of 69 and was interred in Gansevoort, Saratoga County.

Dave Waite has had a lifelong interest in New York State and Adirondack history. His research has been published by historical organizations across upstate New York.  His most recent article “With Energy and Success, Thorp & Sprague’s Mohawk Valley Stage Line,” is featured in the Winter 2021 New York Archives Magazine. David’s email is This email address is being protected from spambots. You need JavaScript enabled to view it.

More in this category: « 1820 Religious Revival in Malta, NY St. Patrick’s Day in Schuylerville 1898 »
back to top